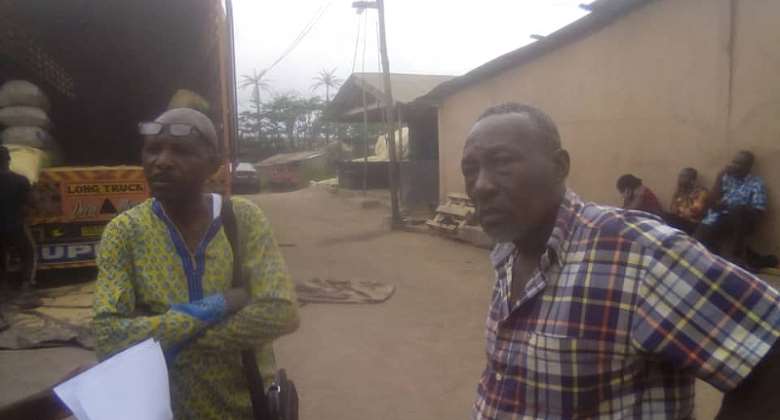 Mr. Thomas Adom explaining a point to our correspondent (in jeromi fashion)

Following the recent press conference organised by the Poultry Farmers Association of Ghana which highlighted among other things, the challenges confronting members, increasing prices of products and the outbreak of bird flu in the industry and how to solve it to sustain the business, a renowned poultry farmer, Mr Thomas Adom has added his voice to the call on the need for government to intervene before the entire poultry farms in the country collapses.

Speaking to the ModernGhana News correspondent in an exclusive interview, Mr Thomas Adom, the Managing Director of Bossway Farms Company Ltd reiterated that for a very long time the development of poultry farm sector have been neglected by the government.

Mr. Adom particularly mentioned poultry feeds as the major challenges crippling their businesses. He added that apart from the scarcity of obtaining feeds, prices of poultry feeds are high.

He said from last year up to now, feeds for poultry farms have shot up by over 100%.

He however called on the Minister of Ministry of Food & Agriculture to be up and doing to put measures in place to restructure the poultry industry from total collapse, since the sector contribute positively towards national development.

Touching on the birds' flu outbreak, Mr Adom pointed out that governments across the world compensate affected farmers to sustain businesses.

In the case of Ghana, he intimated that all past governments fail to support them in times of crisis.

Another poultry farm operator in Ejisu, Nana Osei Bonsu expressed disappointment in the Minister of Food and Agriculture for his inability to restructure the poultry farm industry.

Nana Bonsu explained that the cost of poultry feeds are very high and difficult to get, a situation he said is undermining their business.

According to him, bags of maize are allegedly smuggled out to neighbouring country Burkina Faso at a low price and the Burkinabe nationals in return, sell the same maize back to Ghanaians at a high price.

Mr Bonsu urged the authorities especially politicians to avoid politics in national affairs and build an economy that will sustain businesses.