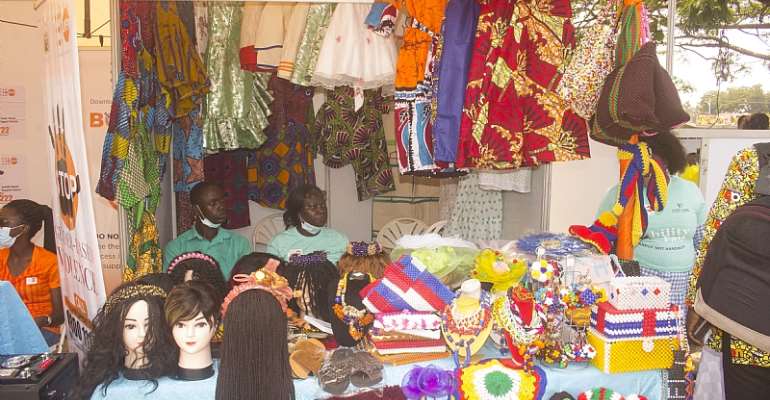 A disability advocacy organization, Henry Djaba Memorial Foundation, led by former Minister for Gender and Social Protection, Otiko Afisa Djaba, has held the first ever Ability Fair in Accra, on July 30 and 31, 2021.

The fair which was under the theme, "Creating Opportunities for Persons with Disabilities", offered persons with disabilities the platform to exhibit various talents and skills.

On display were works such as artifacts, sugar crafts, fashion designs, bead works, body lotions, detergents, and sanitizers. Also on exhibition were basketry, catering services, beverages, woven furniture, weavons, sandals and bags, among others. There was also showcase of talents in performing arts like music, dance, and poetry.

As part of the event, patrons were given free health screening for diabetes, BP, hepatitis B, as well as eye screening.

Mrs. Otiko Djaba, in an interview with ModernGhana News called on the public, including state and cooperate institutions to patronize the products and services of persons with disabilities.

The former Minister said, "for instance, state agencies such as the security forces, Ghana Education Service, Ghana Health Service, the banks as well as private organizations can contract disabled dress makers to sew their uniforms for them".

She stated that no person with disability would love to live their whole lives on handouts; explaining that it was lack of opportunities and support that sent some of them into begging. And so, when they (persons with disabilities) were able to engage in ventures as were exhibited at the fair, the public must encourage them by patronizing their products and services.

She said, interested persons and organizations could contact her outfit to link them to whichever product or service providers they would want to engage.

Mrs. Otiko Djaba also appealed to financial institutions to make credits available for persons with disabilities who would want to go into such profitable ventures.

She disclosed that the fair would be an annual event to throw the spotlight on the abilities of persons with disabilities.

One of the partners of the fair was the Center for Employment of Persons with Disabilities (CEPD). The director of the center, Mr. Alexander Kojo Tetteh was full of praise for the Henry Djaba Memorial Foundation for the initiative; and called for more of such events.

He believed that such events would afford persons with disabilities the opportunity to show to the world that disability is indeed not inability.

Mr. Tetteh said, such attitudes must be done away with, and persons with disabilities encouraged to put their God-given talents and skills to use and contribute to the development of society.

Obour also in an exclusive interview, expressed amazement for the great talents and skill displayed by persons with various disabilities.

He said, he noticed that all they needed was just a little push and they could be contributing greatly to the economic development of the Country. He, therefore, called on cooperate Ghana to endeavor to commit just 10% of their cooperate social responsibility budgets to assist disabled entrepreneurs.