Chief Justice Should Not Be Removed 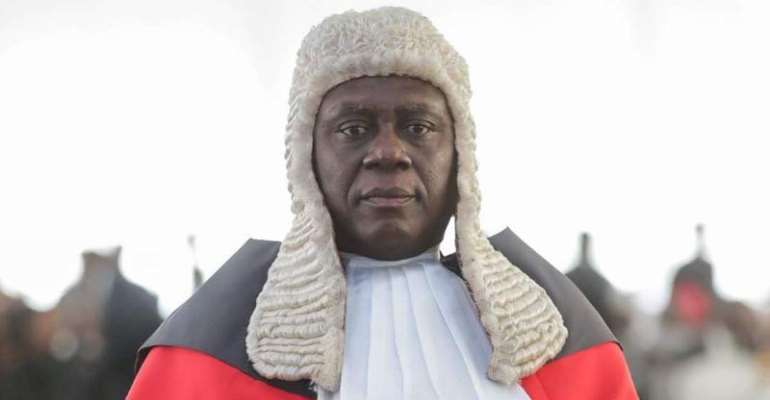 I am commenting on the news story captioned “A Prima Facie Determination as a Pre-Condition for Removing CJ Not Grounded in Law – ASEPA to Sampson Lardi Ayenini” Modernghana.com 7/29/21) some 48 hours after reading the same. So, I may inadvertently gloss over a detail or two of the arguments contained therein, although this is highly unlikely, in view of my studious and avid interest to ensure, in my own small and distant and largely oblique way, that justice gets served in the interest of the indispensable preservation of both the integrity of the Office of the Highest and Most Prominent Jurist of the land.

We have all witnessed dastardly attempts by the leaders of the present main opposition National Democratic Congress (NDC), in particular under the tandem and overlapping tenures of Presidents John Evans Atta-Mills, late, and John Dramani Mahama to literally eviscerate the institutional relevance, credibility and integrity of the country’s judicial establishment, at large, in particular flagrant attempts to nullify the credibility and integrity of Ghana’s first female and longest-serving Chief Justice, to wit, Mrs. Justice Georgina Theodora Wood, between January 2009 and circa 2016.

Apropos the afore-referenced news story or article, I readily confess that I have personally not read the article authored by Mr. Sampson Lardi Ayenini, the renowned lawyer and award-winning current affairs anchor of the Multimedia flagship multicast program titled “Newsfile,” but the salient gist of the article, as highlighted and rejoined by Mr. Mensah Thompson, the one-man member and Executive-Director of the so-called Alliance for Social Equity and Public Accountability (ASEPA), is inescapable and crystal clear. And it is that the blindly pro-NDC Mr. Thompson, or Mensah Thompson, would rather have Chief Justice Kwasi Anin-Yeboah summarily crucified and removed from office without recourse to justice in any shape or form whatsoever.

Such viewpoint obviously stems from the decision by the leaders of the National Democratic Congress, led by the former President and the 2020 Presidential Candidate of the latter political establishment, namely, Mr. John “European Airbus Payola” Dramani Mahama, to farcically attempt to scapegoat Chief Justice Anin-Yeboah for the epic failure of the swashbuckling Mahama Gang to clinch victory in the 2020 Presidential Election which, by the way, absolutely no serious observer of the Fourth Republican Ghanaian political terrain had expected. But, of course, the main issue at stake here is the stark fact of whether the President, Nana Addo Dankwa Akufo-Addo, is empowered or authorized by Ghana’s present Republican Constitution to ignite the laid-down process or procedure for the effective removal of Chief Justice Anin-Yeboah, when Nana Akufo-Addo may be clearly envisaged not to have or is bereft of any forensically credible evidence for doing so.

For Mr. Sampson Lardi Ayenini, it would be prejudicial for the Presidency or Nana Akufo-Addo, as it were, to establish the 5-Member Committee stipulated by the Constitution to investigate allegations of bribery against the Chief Justice, when no clear-cut evidence pointing to the fact of Mr. Anin-Yeboah’s having violated his professional code of ethics and honor, entailing the solicitation of a bribe from a citizen of the land with a case pending before the Apex Court, in which the Asante-Nyinahin native, if memory serves yours truly accurately, was the presiding judge or one of the presiding judges has been presented to the President, such as was the case involving former Chairperson of the Electoral Commission (EC), namely, Mrs. Charlotte Kesson-Smith Osei. In the case of Mrs. Osei, of course, the alleged professional misconduct had to do with procurement protocol. And so far, from my media gleanings, there does not appear to be any credible evidence pointing to the fact of the Chief Justice’s having demanded and/or received any justice-tilting or justice-eviscerating “palm-greaser.”

Even so, as a friend suggested to me in a recent telephone conversation, it is probably the best practice for the President to have reportedly established the 5-Member Investigative Committee or Team to determine the fact of whether Chief Justice Anin-Yeboah has committed or ever committed the crime that a legally questionable Lawyer Kwasi Afrifa claims that the former has, since such a move on the part of the President clearly indicates that Ghana’s former Attorney-General and Minister of Justice has absolutely no intention whatsoever of protecting the accused Chief Justice, who may or may not be guilty of any of the allegations made against him by Lawyer Afrifa and/or his chieftain client in the latter party’s case with a globally renowned and filthily moneyed multinational telecommunications company or corporation.

Yes, Lawyer Kwasi Afrifa may very well be a “questionable legal character” or shyster lawyer because even as of this writing, there was a news report making the rounds on several local Ghanaian media portals to the effect that Lawyer Afrifa had been hit with at least 9 charges verging on his violation of professional ethics and/or practices and principles. The latter report may very well point to the fact of the accuser’s having a motive or motives that may very well prompted a desperate Lawyer Afrifa to concoct his case of criminal misconduct against Chief Justice Anin-Yeboah.

ASEPA’s Mr. Mensah Thompson also clearly appears to harbor some protean motive of vendetta in his very strange and scandalous demand of President Akufo-Addo for the names and profiles of the 5-Member Committee established to investigate the allegations against Chief Justice Anin-Yeboah to be published for public consumption or to be put into the public domain, all in the dubious name of the Right to Information (RTI) or the People’s Right to be Informed about the conduct of citizens in positions of public trust. The catch here, though, is that Mr. Mensah Thompson has absolutely no right to demand the crucifixion of Chief Justice Anin-Yeboah on the mere and patently untenable strength of hearsay, if there validly and, indeed, legitimately existed any such prejudicial pretext.