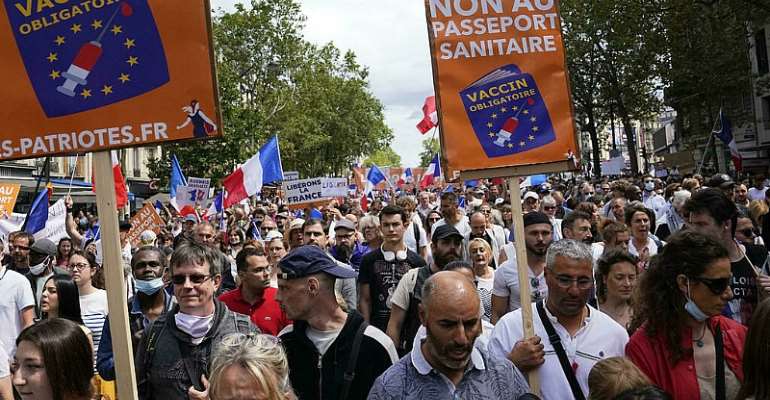 Thousands marched through the streets of Paris and other cities across France on Saturday to express their anger over the implementation of the government's health pass. With Covid-19 infections on the rise, French lawmakers have passed a bill requiring the pass in most places as of 9 August.

Anti-pass marches were held in cities across France, and four separate protests were held in the French capital, for a third weekend in a row.

The pass, that will be needed to enter restaurants and other public venues from 9 August. Some spaces already require the pass upon entry.

It requires vaccinations or a quick negative test or proof of a recent recovery from Covid-19 and mandates vaccinations for all health care workers by mid-September.

Some 3,000 security forces and police in full riot gear gathered in Paris to push some demonstrators back and some tear gas was fired against some crowds.

Tensions flared in front of the famed Moulin Rouge nightclub during what appeared to be the largest demonstration. Lines of police faced down protesters in up-close confrontations during the march.

A parallel march was held by former colleague of far-right leader Marine Le Pen who left to form his own small anti-EU party. Florian Philippot's new cause, against the virus pass, brought hundreds out to march to the Health Ministry.

Elsewhere, police reported 10,000 people at a march in Montpellier, while in Nice, around 6,500 people turned out and in Marseille, there were around 4,800 people.

'Blackmail'
Polls show a majority of French support the pass, which was approved by lawmakers to be implemented from 9 August, but some French are adamantly opposed.

“I think that we mustn't be told what to do,”  a 37-year-old nurse told The Associated Press, adding that medical workers during the first wave of Covid-19 were quite mistreated.

"Suddenly we are told that if we don't get vaccinated it is our fault that people are contaminated. I think it is sickening,” she said, accusing the government of using a form of “blackmail."

The demonstrations have progressively attracted more number of people starting with 110,000 on 24 July which was followed by 161,000 the week after.

These demonstrations are taking place at a time when according to a poll, more than 60 percent of the French say they are in favour of the introduction of a health pass to enter public places and 69 percent are in favour of compulsory vaccination for healthcare workers.

More than 24,000 new daily cases of Covid-19 were confirmed in France on Friday night — compared to just a few thousand cases a day at the start of the month.

According to a study conducted by public health services (Dress), 85 percent of patients in hospital with Covid in France, including those in intensive care are not vaccinated, while fully vaccinated patients represented only 7 percent.

Published on Friday, the study took place between 31 May and 11 July.