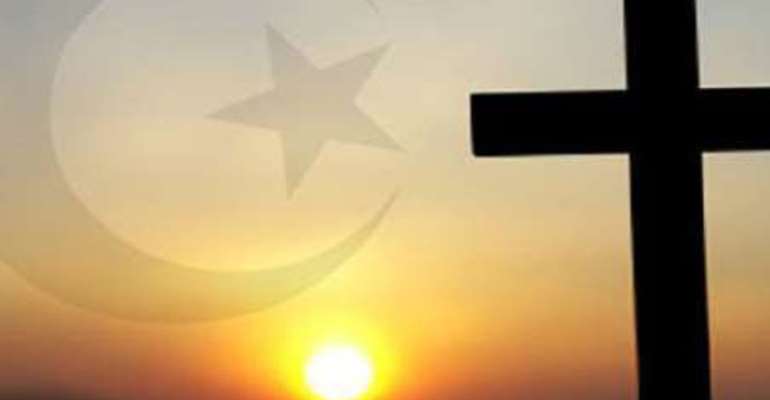 LIFE IN the present fallen world is characterised by inevitable conflicts between individuals, families, organisations, communities, nations and even religions resulting from overlapping interests, beliefs and ideas. But the love of God is the virtue which influences people with different backgrounds to see beyond their differences and co-habit peacefully.

In the world that is to come where righteousness would reign with Christ Jesus as King, life would be like what Isaiah, the Prophet foresaw, “The wolf shall dwell with the lamb, and the leopard shall lie down with the young goat, and the calf and the lion and the fattened calf together… They shall not hurt or destroy…” (Isaiah 11:6-9).

In the first edition, we considered a conversation between two Nigerian prominent opinion leaders regarding peaceful Christian-Muslim coexistence as a necessary reminder to all Ghanaians. Dr. Nnamdi Azikiwe, a Christian and political figure from Nigeria's predominantly ethnic Igbo Eastern region, once reportedly had an historic communication with Sir Ahmadu Bello, the Sarduna of Sokoto, Premier of Northern Nigeria.

This is a call to both Christians and Muslims in Ghana to promote peace by understanding their differences for the sake of national development. A call to peace and peaceful coexistence between the two prominent faith groups, is a call to acknowledge the fact that Christianity and Islam are not the same; they are different even though they may share some similarities.

The two faiths have different founders and worship with different Scriptures. They originated from close yet different places and times in the Middle East; they each hold different set of beliefs and practices and different doctrines.

Thus, studying and learning to understand the differences of each other with respect and tolerance is a great step toward sustaining peace between them in Ghana and Sub-Saharan Africa in general. Understanding each other's differences has the tendency to prevent confrontations, mockery, insults and other negative encounters between them.

Eventually, the need for loving your neighbour as yourself, which is the greatest message in Christianity, can partly be demonstrated and reciprocated. This, in the words of Makafui M. Tayviah, “provides the real grounds in which interfaith relations in Ghana can be carried out.

As demonstration of the commitment for joint social actions despite their differences to walk in the current trends in Christian-Muslim relations, leading members of the faiths need to form various inter-faith organisations, associations and entities to spearhead peace-building initiatives and education for peace in the country.

According to Ludovic and Lynch, “In the Sub-Saharan Africa, inter-faith organisations exist at the local, national and international levels. Some of the most notable at the continental level are the African Council of Religious Leaders (ACLR), Religions of Peace, the Inter-Faith Action for Peace in Africa (IFAPA), the Programme for Christian-Muslim Relations in Africa (PROCMURA), and the Inter-Religious Council of Sierra Leone (IRCSL).”

They further assert that multi-faith associations established in Africa for peace-building to have the potential to neutralise attempts to divide communities on religious lines. They also go a long way to help change the negative perceptions and suspicions that exist between the various religious communities, and to engage in dialogical action, meaning organised actions to transform the social structures of injustice within society.

In Central Africa Republic, for instance, the contribution of the National Interfaith Peace Platform to its reconciliation process has been phenomenal. From initiating the process of reconciliation in remote villages to relevant high level meetings internationally, the heads of the Protestant, Catholic and Muslim communities, have been working together tirelessly for months to restore the social fabric of their country.

There is no denying the fact that Christianity and Islam have come to stay in Ghana and the Sub-Saharan Africa in general side-by-side with the traditional and indigenous African religions. Each of the religions has its own unique set of beliefs, doctrines, practices, and interests, thereby making it different from each other.

Rather, it lies in understanding their differences and learning to live with them. The solution also lies in the formation and sustenance of more inter-faith organisations to inclusively dialogue and partner with other relevant stakeholders to create the enabling environment for peace and peaceful-coexistence.