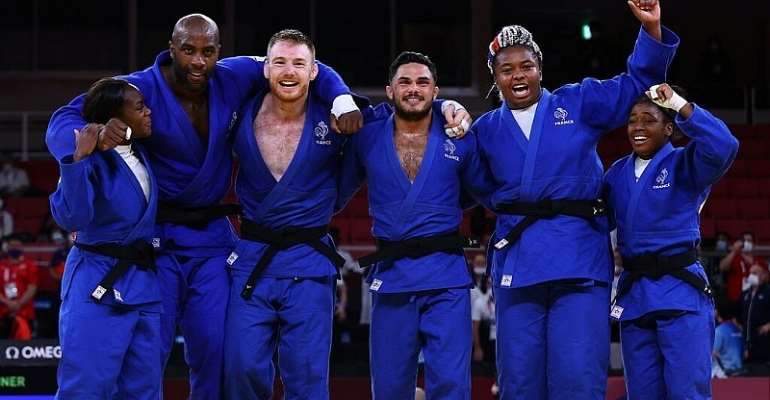 France upped its score of medals at the Tokyo Olympics on Saturday including gold in mixed team judo, silver in the women's Rugby Sevens and a bronze in the mixed triathlon relay.

France's mixed judo team lead by Clarisse Agbégnénou and Teddy Riner, beat Japan's team 4-1 to grab their first ever gold medal in this category, introduced only this year.

After their close semi-final against Israël (4-3) on Friday evening, Sarah Léonie Cysique, Romane Dicko and Axel Clerget proved to be up to the mark on Saturday.

Although Japan was a favourite, having already garnered 12 medals, nine of them gold, France's stamina and perseverance brought in solid results on the tatami, ending up with eight medals in total, two of them gold.

Silver in rugby
In the women's Rugby Sevens, France was defeated by New Zealand 26-12 in the final on Saturday, walking away with a silver medal.

With gold, the New Zealand extended their dominance over the French after having beaten them comfortably 29-0 in the 2018 World Cup final.

It means Brownlee now has a full set of Olympic medals having finished in the silver medal position in the individual event at the 2016 Rio Olympics and claiming bronze behind him at London 2012.

More good news for France
The French women's fencing team, Manon Brunet, Charlotte Lembach, Cécilia Berder and Sara Balzer narrowly lost to the Russian team (45-41) to come up with silver in the final.

There was good news elsewhere too. In windsurfing, France's Charline Picon, title holder, brought in a silver medal, as did her colleague Thomas Goyard in the men's competition.

The Nigerian won her women's 100m heat on Friday but on Saturday the Athletics Integrity Unit said she had tested positive for human growth hormone in an out-of-competition test on July 19.

The 32-year-old won the long jump silver medal at the 2008 Beijing Olympics.

Cool at the pool
Caeleb Dressel powered to a third gold medal of the Games but his bid for a potential six titles was thwarted.

The American established himself as the dominant male swimmer of the Tokyo Games as he smashed his own world record to win the 100m butterfly title for his third gold medal.

The American touched in 49.45 seconds to better his own world best of 49.50 set two years ago.

Dressel could win another two gold medals, having already won the 100m freestyle crown and the 4x100m relay title with his team.

His US teammate Katie Ledecky stormed to her third straight Olympic 800m freestyle title with a dominant swim to bank her fourth medal in Tokyo.

Britain's four-strong team of Kathleen Dawson, Adam Peaty, James Guy and Anna Hopkin touched in 3min 37.58sec to break the previous 3:38.41 mark set by China in Qingdao last year. The Chinese were second in 3:38.86 and Australia third in 3:38.95.

Peaty had won the 100m breaststroke gold earlier this week.