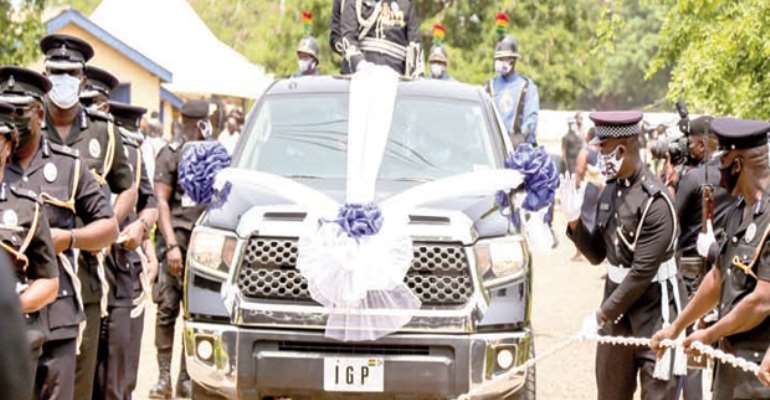 Senior Police Officers pulling out the IGP from active service

James Oppong-Boanuh, who until yesterday afternoon was Inspector General of Police (IGP), was pulled out of the Ghana Police Service to end his career as a top police officer during a colourful ceremony at the National Police Training School, Tesano, Accra.

A highlight of the activity was the symbolic handover of authority by the outgoing IGP to the acting IGP, Dr. George Akuffo Dampare.

Dr. George Akuffo Dampare, was until his appointment as the Acting IGP by President Akufo-Addo on July 21, 2021, the Director General in charge of Administration.

The Minister of the Interior, Ambrose Dery; the Chief of the Defence Staff, Vice Admiral Seth Amoama; the Comptroller-General the Ghana Immigration Service, Kwame Asuah-Takyi; Minister for Works and Housing, Francis Asenso-Boakye, the Greater Accra Regional Minister, Henry Quartey, and the Chief Director of the Interior Ministry, Adelaide Annor-Kumi, were some of the government officials who graced the occasion.

Also present were three retired IGPs C.O. Lamptey, Patrick Kwarteng Acheampong, C. O. Dawornu as well as members of the Police Management Board, senior police officers and men as well as civilians and family members were at the National Police Training School parade grounds, where the pulling ceremony took place.

In a farewell speech before he was pulled out, Mr. Oppong-Boanuh expressed gratitude to President Akufo-Addo for giving him the opportunity to serve as the leader of the Ghana Police Service.

He also acknowledged the immense support of the retired IGPs and the National Association of Retired Police Officers (NARPO) during his tenure as IGP.

“I am bowing out today with pride and avowed conviction that this service is blessed with a number of hardworking and committed officers who are going to support the incoming IGP to successfully continue from where I left,” Mr. Oppong-Boanuh stated.

Recollecting his professional experiences as a police officer, Mr. Oppong-Boanuh said his path has not been rosy, having been characterised by a number of turbulent experiences and some fond memories.

Continuing, he said “through it all, God granted me the necessary guidance and wisdom to navigate around them.”

“Introspection of my 33 years' experience in the service unveils a mixture of good moments as well as downturns. In all these times, I look back with pride knowing that I have significantly contributed my mettle to the achievement of a number of strides in the Service.”

He urged personnel to give the necessary support to the incoming IGP and his administration, to effectively discharge the core mandate of the Police Service to maintain law and order.

Mr. Oppong-Boanuh maintained that Ghanaians need nothing but a peaceful environment to guarantee economic development and improved livelihood.

“In this era of the emergence of sophisticated crimes perpetrated by a network of organised criminal gangs, the new IGP can only succeed when he is accorded the requisite support by all and sundry,” he added.

In a word of exhortation by the Director General of Religious Affairs of the Ghana Police Service, DCOP Rev Fr George Arthur thanked God for the life of Mr. Oppong-Boanuh and his contribution towards the growth of the Police Service.

He said “the nation is grateful to you for the noble role you played in maintaining the peace of the nation. As you retire, have time to rest, spend more time with your family and pay attention to your health and spiritual life.”

He urged officers in active service to be humane and merciful, especially when they have the opportunity to decide people's fate, and know that no human situation is permanent.