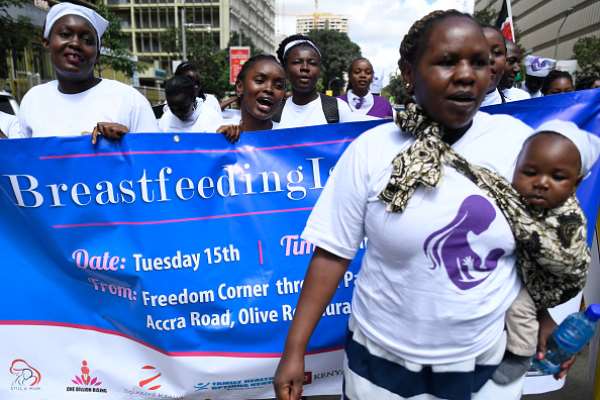 Exclusive breastfeeding in the first six months, as recommended by the World Health Organisation , is vital for child growth and survival. Exclusive breastfeeding means that the infant receives only breast milk. This is because breast milk has adequate amounts of nutrients and water required for healthy growth as well as immune factors required for the development of the infants immune system in the first 4-6 months of life.

Other benefits of breastfeeding include protection against common childhood illnesses such as diarrhoea and pneumonia, and infant death. Scaling up exclusive breastfeeding can prevent 823,000 child deaths every year , and protect against overweight and diabetes .

There are benefits for mothers too . It's been shown to reduce risks of breast and ovarian cancer, improve the spacing between births and reduce the risk of diabetes.

Kenya has made great efforts to increase the number of women breastfeeding their babies. Exclusive breastfeeding rates have increased over the years from 32% in 2008 to 61% in 2014 , which is higher than the the current global average of 43%.

In a bid to address these patterns, the Kenyan government has put a number of initiatives in place to promote exclusive breastfeeding during the first six months of a baby's life.

One is the baby friendly hospital initiative . Launched in 1991, it aims to scale up 10 interventions in maternity facilities to support successful breastfeeding. The initiative has been effective in promoting exclusive breastfeeding during the first weeks , but not as effective in sustaining it through to the recommended six months.

This highlighted the need to scale up the promotion of breastfeeding in communities, which led to the baby friendly community initiative. This equips primary healthcare workers and community health volunteers with skills to help mothers breastfeed and feed their infants and young children. It also empowers other family and community members to support breastfeeding mothers.

The intervention is important particularly in regions such as Africa where 60% of women give birth at home .

We conducted a study to assess the effectiveness of the baby friendly community initiative in Koibatek, a rural area in the Rift valley region of Kenya where mothers exclusively breastfeed for an average of three months .

The study was conducted in 13 community units in Koibatek sub-county. Pregnant women aged 15-49 years were recruited and followed up until their children were at least six months old. Mothers in the intervention group received standard maternal, infant and young child nutrition counselling and support from trained community health volunteers, health professionals, community mother support groups and mother to mother support groups. Those in the control group received standard counselling only, consisting of messages on infant and young child nutrition. No maternal and child nutrition related support was given to the mothers in the control group. Data on breastfeeding practices were collected.

A total of 823 pregnant women were recruited. Compared with mothers in the control group, the 351 mothers in the intervention group were three times more likely to exclusively breastfeed for six months and for a longer time (19 days longer).

The intervention used minimal resources because it was implemented within the existing health system by community health volunteers who were instrumental in providing information on maternal infant and young child nutrition.

The mother to mother support groups consisted of 9-15 pregnant, lactating women and in some cases fathers and grandmothers. The group met monthly to discuss issues around pregnancy and young child feeding and nutrition. Community health volunteers and a lead mother, who acted as the leader of the group, facilitated the meetings.

We believe our findings show that supporting mothers in their communities has the potential to increase exclusive breastfeeding for longer.

This is because the help women get in their communities addresses some key reasons that have been identified for the drop off in women breastfeeding exclusively in the first six months. These are:

Lack of information/knowledge on the importance of breastfeeding

Advice and cultural beliefs and practices which negatively impact breastfeeding

Antonina Mutoro works for the African Population and Health Research Center. She is affiliated with the University of Glasgow, United Kingdom

Elizabeth Kimani-Murage works for the African Population and Health Research Center (APHRC). She receives funding from the Wellcome Trust, USAID, NIH. She is affiliated with Brown University, USA.