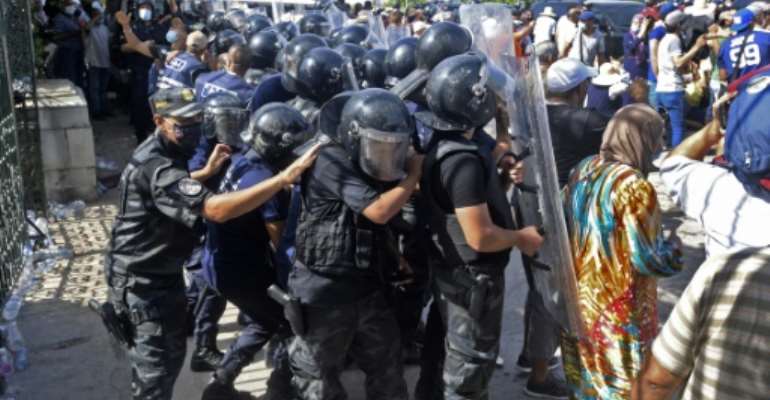 Tunisian security officers hold back protesters outside the parliament building on July 26, 2021 after President Kais Saied suspended the legislature. By FETHI BELAID (AFP/File)

US Secretary of State Antony Blinken said Thursday that Tunisian President Kais Saied promised him that he was committed to democracy but urged action including the restoration of parliament.

Blinken spoke Monday with Saied after the Tunisian leader sacked the government and suspended parliament for 30 days, leading the largest party in the coalition government to accuse him of carrying out a coup in the birthplace of the Arab Spring.

Blinken, asked about the conversation in an interview with Al Jazeera, said that Saied gave a "lengthy explanation" of why he acted.

"The intentions he expressed to me were to return Tunisia to that democratic path and to act in a way that was consistent with the constitution," Blinken told the Qatar-based network on a visit to Kuwait.

"But of course we have to look at the actions that the president takes, that Tunisia takes," he said.

"So our strong hope and expectation is that Tunisia will return to that democratic path, act consistent with the constitution, unfreeze the parliament, have a government in place to do the work of the people, to be responsive to their needs."

The State Department had previously said only that Blinken encouraged Saied to "adhere to the principles of democracy and human rights" without explicitly calling for the return of parliament.

Blinken in the interview reiterated his criticism of curbs on the media, saying that the United States expects Tunisia to "uphold and respect the rights of journalists."

Saied, a political newcomer when he won a landslide presidential election victory in 2019, intervened after mass protests over the government's handling of the Covid-19 pandemic.

He also dismissed top officials and the head of the national television channel and declared what he calls a crackdown on corruption.