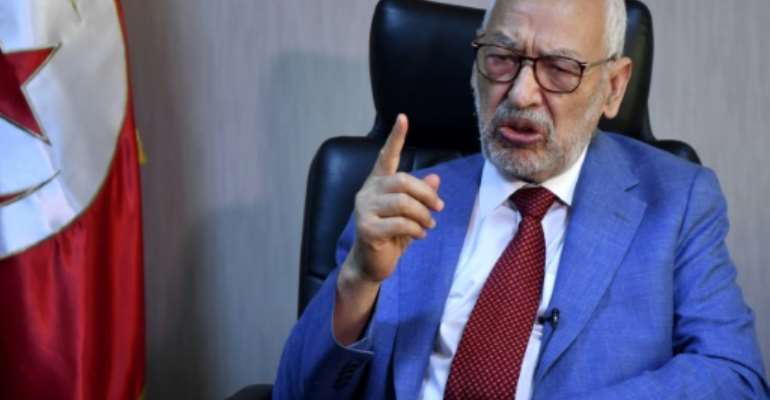 Tunisia's parliament speaker and Ennahdha party leader Rached Ghannouchi, gives an interview with AFP at his office in the capital Tunis on July 29, 2021. By FETHI BELAID (AFP)

Rached Ghannouchi, veteran leader of Ennahdha that says it is the victim of a "coup d'Ã©tat" in Tunisia, embodies the shifting sands of his Islamist-inspired party over the past decade.

As a result, he is now struggling to mobilise a divided leadership and weary supporters.

On Monday, the 80-year-old veteran camped out for 12 hours in front of parliament in Tunis, condemning as unconstitutional President Kais Saied's sudden decision to grant himself executive power and suspend parliament for 30 days.

A longtime opposition figure, he was joined this week by a few hundred supporters, a far cry from the thousands who had celebrated his return from London after 20 years in exile after dictator Zine El Abidine Ben Ali's fall in Tunisia's 2011 revolt.

Since the revolution, Ghannouchi, a strict Islamist for some and yet a pragmatist who cohabits with democracy for others, stands accused of bending with the wind to ensure he stays in power.

"He's an old hand in politics, with the skills of a chameleon," explained political scientist Selim Kharrat. "He has shown he can adapt to all situations, even if it means denying his principles."

He said that after 10 years in power, Ennahdha "crystalizes the discontent" of Tunisians in the thick of the North African state's simultaneous political, social, economic and health crises.

As parliament speaker, he holds the second highest office in the land, but has one of the lowest approval ratings of the political class, polls show.

Despite having failed to achieve an absolute majority, he has always ensured Ennahdha's status as a key player in every coalition since the revolution.

He has allowed for alliances with partners of convenience, such as the liberal party Qalb Tounes of businessman Nabil Karoui, arguing the case of "consensus" for the sake of democratic transition.

The author of fiery calls for Islamic sharia laws in the 1970s, he was initially inspired by Egypt's Muslim Brotherhood, before claiming kinship to the Islamist model of Turkey's President Recep Tayyip Erdogan.

He has since 2016 transformed Ennahdha into a strictly politics-only movement, while promoting himself as a "Muslim democrat" defending conservative values without dogma.

But concessions have divided his camp.

Born into a modest family in El Hamma, a small town on the south coast, Ghannouchi studied theology and philosophy, mainly in Cairo and Damascus.

After his return to Tunisia in the late 1960s, he founded the "Movement of the Islamic Tendency" in 1981, a party that was renamed Ennahdha (Rebirth) eight years later.

Pardoned by Ben Ali in 1987, he was later prosecuted again after an electoral breakthrough, and finally went into exile in London in 1991.

That was where he cultivated the image of an Islamic reformist and a "man of consensus".

"He rubbed shoulders with all the European and Arab elite, both nationalist and Islamist," said Ahmed Gaaloul, an Ennahdha member and a former youth and sports minister.

But his flexibility and tactical moves have worn thin.

"Ennahdha's electoral base has narrowed, and it is divided internally," according to Kharrat.

In 2020, one hundred influential members leaked a letter calling for Ghannouchi to stand down.

Kharrat said the politically weakened and physically frail Ennahdha leader is in no position to resist Saied's power grab.

"He is paying for his political mistakes," he said.

Ennahdha under Ghannouchi has long blocked the formation of a constitutional court in Tunisia, the only institution that would today have had the power to nullify the president's moves.