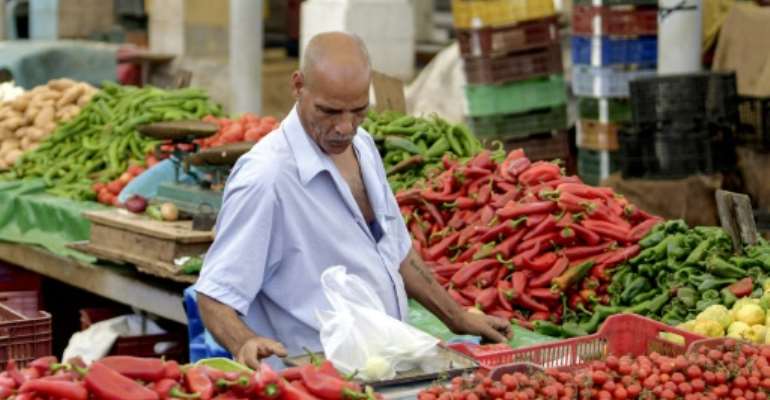 A pedlar weighs produce at a stall at the popular Bab el-Fellah market in Tunisia's capital Tunis. By FETHI BELAID (AFP)

Spiralling prices, stagnant wages, jobs lost to the pandemic: anger over deep economic woes in debt-hit Tunisia goes a long way to explain the political turmoil that has hit the North African country this week.

When President Kais Saied fired the premier, suspended parliament and assumed executive powers on Sunday in what critics called a "coup d'etat", tens of thousands of Tunisians nonetheless took to the streets to celebrate.

A visit to a Tunis market helps explain why.

Many people say they are worse off than they were 10 years ago, when a popular revolt ousted dictator Zine El Abidine Ben Ali, kicking off the Arab Spring and sending Tunisia on a rocky path to democracy.

Tunisia, a country of 12 million, has had nine governments since, but none have managed to revive the economy, which since last year has been additionally battered by the Covid pandemic.

"If we're in this situation, it's because of the political parties who only think about themselves," said Adel Ben Trad, a butcher in the capital's Bab El-Falla souk known for its low prices.

"In 10 years, we must have lost half of our customers," he said, explaining that many shoppers now desperately haggle or ask for credit because they can no longer afford his rib steaks and lamb chops.

"All prices have gone up, but wages have not," said the 52-year-old butcher, who admitted that he too struggles to survive on his income of 600 dinars (180 euros) a month.

Given the dire situation, he said he fully supports the president's power grab.

Tunisian security forces clashed with anti-government protesters in front of the parliament in the capital Tunis on July 25. By FETHI BELAID (AFP/File)

Tunisia's 2011 revolution famously started when the young fruit and vegetable seller Mohammed Bouazizi, after an official denied him a permit and slapped him, set himself on fire in a desperate act of rage.

Today, many Tunisians still feel a simmering anger against the state and a political class they see as distant and unable to salvage the collapsing economy, slowly crushing their dreams of a brighter future.

The dinar currency has plunged by about 50 percent over a decade, and debt has reached 100 percent of GDP, compared with 45 percent in 2010.

Tunisia's economy last year contracted by more than eight percent as the Covid pandemic battered the tourism-reliant economy. The dinar currency has plunged by about 50 percent over a decade, and debt has reached 100 percent of GDP. By FETHI BELAID (AFP)

Tunis is seeking a fourth loan in 10 years from the International Monetary Fund, and some fear the state will default, like Lebanon has.

The pandemic has flared, sending cases and deaths surging and sparking chaos and stampedes at vaccination centres.

Amid the sense of chaos, which has sparked angry street protests, many point the finger at what they say is politicians' chronic nepotism and corruption.

Saied, addressing some of the public's concerns, declared a graft crackdown late Wednesday and accused 460 businessmen of embezzlement, while also urging traders and wholesalers to "lower prices".

The Covid pandemic has sent cases surging in Tunisia which now has one of the world's highest official per-capita death rates. By BECHIR TAIEB (AFP/File)

In the Tunis market, Haykel Mosbahi accused the Islamist-inspired party Ennahdha, which has been a member of every government for the past 10 years, of being "most responsible for this crisis".

Mosbahi, 40, said he lost his job as a civil engineer in a construction company during the 2011 revolution and has never found an equivalent position since.

The father of three now works as a security guard, at about one third of his previous salary.

"I used to be able to buy new clothes," he said bitterly as he rummaged through bins of second-hand T-shirts.

"But job offers are only for Ennahdha's supporters. Without the right phone call, you are never a priority."

He too voiced hope that President Saied "will finally get us out of here".

The crucial tourism sector has taken a hit amid the Covid pandemic. By Bechir TAIEB (AFP)

Standing at a nearby vegetable stall, pensioner Moncef Achouri was more reserved about the head of state who has promised to "save Tunisia".

"What the president is doing is a putsch," said the 66-year-old former English teacher. "He's promising a lot of nice things, like Ben Ali, but nothing will change."

Reflecting on the turbulent past decade, Achouri said that "in the end, people don't see their situation improving and they can't appreciate the freedom they gained with the revolution.