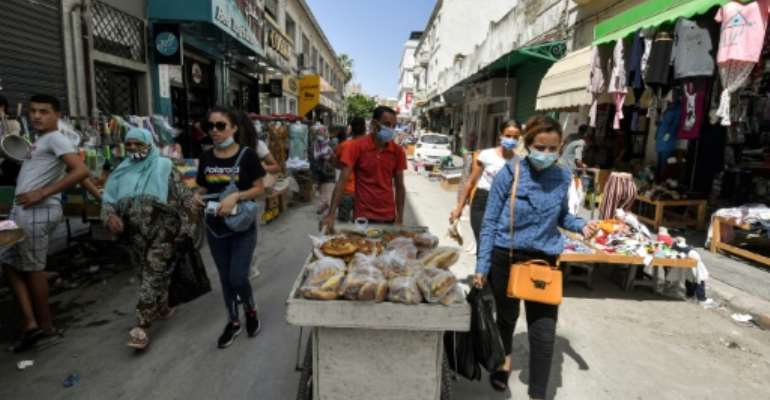 Soaring inflation has eaten away at Tunisians' purchasing power. By FETHI BELAID (AFP)

Tunisia's President Kais Saied on Thursday appointed a former national security adviser as interior minister, days after grabbing power in what his opponents labelled a "coup".

The presidency announced his nomination just as Saied, who has spoken of "imminent dangers" to the North African country, came under increasing international and domestic pressure to form a new government.

Tunisians are waiting for the appointment of a new prime minister and the announcement of a road map to emerge from the crisis.

While the president's actions fuelled political turmoil, US Secretary of State Antony Blinken said Thursday that Saied had promised him he was committed to democracy.

But Blinken also urged action, including the restoration of parliament, which the Tunisian president suspended on Sunday for 30 days as he seized all executive powers.

"The intentions he expressed to me were to return Tunisia to that democratic path, and to act in a way that was consistent with the constitution," Blinken said during an interview with Al Jazeera, of a conversation with Saied earlier this week.

"But of course, we have to look at the actions that the president takes, that Tunisia takes," he said.

The young democracy had often been cited as the sole success story of the Arab Spring.

But, a decade on, many say they have seen little improvement in living standards, and have grown infuriated by protracted political deadlock with infighting among the elite.

During a meeting with a leader of the employers' federation UTICA, Saied slammed "bad economic choices" made in recent years.

In comments late Wednesday, the president singled out for criticism "those who plunder public money".

Saied accused 460 businessmen of owing 13.5 billion dinars ($4.9 billion) to the state, citing the findings of a commission of inquiry into graft under former dictator Zine El Abidine Ben Ali.

"This money must be returned to the Tunisian people," he said, adding that he intends to offer the businessmen "judicial arbitration".

In exchange for dropping proceedings, the reimbursed money would be injected into less developed parts of Tunisia.

Saied also asked traders and wholesalers to "lower prices" in a crisis-hit economy where soaring inflation has eaten away at the purchasing power of consumers.

He also called for a revival of phosphate production, one of the country's few natural resources.

Saied raised suspicions of corruption that surround the industry, referring to "people in parliament who protect themselves with parliamentary immunity".

Prosecutors have already opened an investigation into political parties suspected of receiving foreign funds for campaigning in 2019 elections.

The probe targets the Islamist-inspired Ennahdha party, which has been part of all coalitions since the 2011 revolution, as well as its liberal ally Qalb Tounes and the Aich Tounsi movement.

After months of political crisis, Saied, whose presidential duties are normally limited to diplomacy and security, seized power by invoking the constitution.

The move was denounced as a "coup d'etat" by Ennahdha, his main opponent.

Saied, an austere legal academic who won office in 2019 thanks to his virulent criticism of political parties, had been well-known for his stance against corruption.

In January he blocked a cabinet reshuffle by prime minister Hichem Mechichi, whom he sacked on Sunday, citing suspected conflicts of interest and corruption by some ministers.

The power grab has been welcomed by many Tunisians struggling to make ends meet and fed up by the mismanagement of the Covid-19 pandemic.

On Wednesday evening, the president also announced the establishment of a crisis unit to manage surging Covid-19 cases.

Tunisia, with a population of around 12 million people, has one of the worst Covid-19 death rates in the world, with 19,000 fatalities linked to the coronavirus.

Ablakwa making noise about Akufo-Addo’s flights for politica...
27 minutes ago