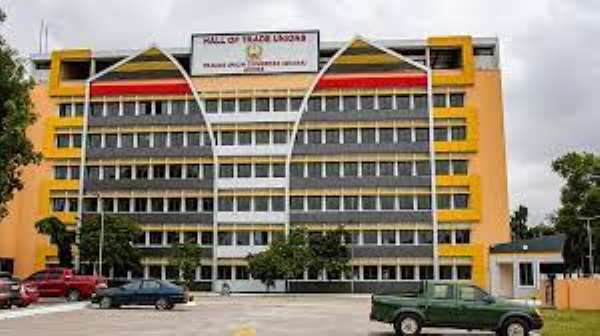 The Coalition Against TUC and Organized Labour in Favour of Ghanian Workers have described as inhuman the 4 percent salary increment.

They are demanding for 15% increment.

This came to light when the Coalition held a press conference in Accra to expressed their disappointment in the leadership of Organized Labour for accepting a 4% increment of salary.

The coalition called on Dr. Anthony Yaw Baah of TUC and Bamford Addo of CLOGSAG to go back to Government with the tripartite committee members to review the 4% salary increment.

"We were astonished when Chairman of TUC Mr. Alexander Nyarko-Opoku told us on phone that he and his Secretary General Dr. Yaw Anthony Baah accepted the 4% salary increment because of covid-19 effects on private companies especially companies at Tema who were laying workers off and can not afford to increase workers salary beyond 4%”.

Below is the unedited press Statement by the Coalition Against TUC and Organized Labour in Favour of Ghanian Workers:

PRESS STATEMENT BY COALITION AGAINST TUC AND ORGANIZED LABOUR IN FAVOUR OF GHANAIAN WORKERS. 27TH JULY 2021

Ladies and Gentlemen of the media, our noble members and supporters of Coalition against Leadership of TUC and Organized labour in favour of Ghanaian workers.Leadership of this noble coalition and all of us have embarked on a very important " No Retreat No surrender" action against the inhumane treatment by our Heads of Labour Unions in Ghana who do not serve the collective interest of Ghanaian worker but theirs.Our message to the Heads of all Labour Unions in

1. The leadership of TUC and Organized labour headed by Dr Yaw Anthony Baah and Bamford Addo of CLOSSAG who represented all labour unions in Ghana at the tripartite committee meeting who signed to approve the 4% salary increment for public sector workers should kindly go back to negotiation table to review the 4% salary increment or declare industrial strike.

3. If they can not serve us right, they have no right to lead us.

4. Until the leadership of our labour unions headed by Dr. Yaw Anthony Baah of TUC and Bamford Addo of CLOGSAG return to the tripartite committee to review the inhumane 4% salary increment of workers in Ghana to a reasonable percentage, we are not going to allow them lead us. We as a Coalition will never accept anything less than a 15% salary increment. Coalition against TUC and Organized labour in favour of Ghanaian workers has assumed over 13, 000 members on our Telegram page within ten (10) days and still counting, this is a sign to tell our leaders that no worker in Ghana is ready to accept the 4% annual salary increment. This Coalition will never relent in this fight until our ultimate goal is achieved.

We are therefore encouraging all of you to give us the necessary support needed and by the grace of the Almighty God, we know we shall win.When our Coalition started the social media protest Mr. Alexander Nyarko-Opoku Chairman of TUC called our Coalition against TUC and Organized labour in favour of Ghanaian workers, inviting our Coalition Executives to come and have a meeting with leadership of TUC. We also met to discuss the TUC leadership invitation that was scheduled on Monday 19th July 2021 @ 12:00pm.It was unanimously agreed at our Coalition meeting that TUC leadership should officially communicate to us in writing so we can equally reply to them agreeing on the date and venue.

The invitation came to us on Saturday 17th July 2021 and scheduling a meeting on Monday 19th July 2021 @ 12:00pm was too short a time.Our position was that the terms of this meeting should be a 50-50 win-win situation and not an imposition or treat us like we were invited for a job interview.We suggested to them that TUC should officially write to us by Monday 19th July 2021 and let us all agree on a date after Monday.Our coalition also requested that TUC should submit to us their position papers at the Tripartite committee meeting for us to study before meeting them on the yet to be agreed date.We also requested for their research findings or papers on the Tema companies issues that necessitated the need to agree on the 4% salary increment.

On a telephone call on Saturday 17th July 2021, Chairman of TUC Mr Alexander Nyarko-Opoku told us TUC used private companies in Tema as a benchmark to determine the percentage of salary increment which affected public sector workers. One would have thought if TUC and Organized labour were really fighting for the interest of their members, they would have used workers of Tarkwa mines who are paid well as a benchmark and not Tema steel works and pure water rubber companies who pay workers something little above a minimum wage. Since then we did not hear from them however, we intercepted a letter from TUC calling it Organized labour groups to a meeting on Friday 23rd July 2021 and our coalition was their subject for discussions. The meeting was about us but because we were not officially invited, none of our members were present in that meeting. We gave them three working days after their meeting expecting to hear from them but up to now we have not been called. We are saying whatever, that meeting was about it is none of our business but there is one thing that we relentlessly stand for and that is Ghanaian workers will not accept that inhumane treatment of 4% salary increment today and we will not accept it tomorrow.

Dr. Anthony Yaw Baah of TUC and Bamford Addo of CLOGSAG please go back to Government with the tripartite committee members to review the 4% salary increment.We were astonished when Chairman of TUC Mr. Alexander Nyarko-Opoku told us on phone that he and his Secretary General Dr. Yaw Anthony Baah accepted the 4% salary increment because of covid-19 effects on private companies especially companies at Tema who were laying workers off and can not afford to increase workers salary beyond 4%. He further said the Government through the finance minister told them if TUC and Organized labour refused to accept the 4% salary increment then there will be retrenchment. What this Coalition is telling the Government and TUC and Organized labour is that the word "retrenchment" does not exist in our labour law and we consider it as an illegal word which the Government used to threaten our union leaders. What is in our Labour law is redundancy which also has its own conditions and package for affected workers (Ghana Telecom for example).

The case of Covid-19 effects on companies in Tema, what we are saying is that, the effect of three (3) weeks lockdown in Greater Accra, Kumasi and Kasoa can not be compared to four years dumsor crisis which eventually collapsed many private companies and Government was hot looking for money to purchase power bagges to eradicate the dumsor and yet Government managed to increase workers salary by 20% in 2011, 18% in 2012, 10% in 2013, 10% in 2014, 13% in 2015, 10% in 2016 and 12.5% in 2017. This is what Dr. Yaw Anthony Baah processor did to help the Ghanaian workers and all these years his predecessor Organized strikes and demonstrations against Government all because of workers welfare.Dr. Yaw Anthony Baah who is a product of TUC took over from his predecessor and this Government reduced salary increment in 2018 to 11% and he was quiet, this Government combined 2019 and 2020 and increase workers salary by 10% meaning each years was 5% and Dr. Yaw Anthony Baah is quiet and the worst of it all, Government again combined 2021 and 2022 and increase it by 11% and said 2021 is 4% and 2022 will be 7% what an insult.This has never happened in Ghana where workers' salaries increased by 4%. This has also never happened in the history of Ghana that tripartite committee members will go to a negotiation table and approve a two years salary increment structure.

On this note, our Coalition will thank the Public sector workers union (PSWU) for identifying themselves with our Coalition demands by Petitioning the TUC and Organized labour to go back to the negotiation table to review the 4% salary increment. We also want to take this opportunity to clear the air about the public misconception that staff of Local government CLOSSAG have received a 15% salary increment. It is a premium of 15% for their members and what it means is that premium is meant for workers with special skills and are of high demand. CLOSSAG gets a 15% premium of the 4% increment and not the entire Monthly salary. For example if your monthly salary is Ghc2000.00, the 4% salary increment will give you ghc80.00 that will be added to your monthly salary. Now if you are local government staff, the Government will give you a 15% premium of the ghc80.00 which is just ghc12.00 now adding the 12.00 + 80.00=ghc92.00. so your 15% premium is just ghc12.00 if your salary is ghc2000.00 We are saying we will not accept the 4% percent salary increment.

Chairman of the Coalition.

“Vaccines As A Tool For Immigration Control Is Retrogressive...
30 minutes ago