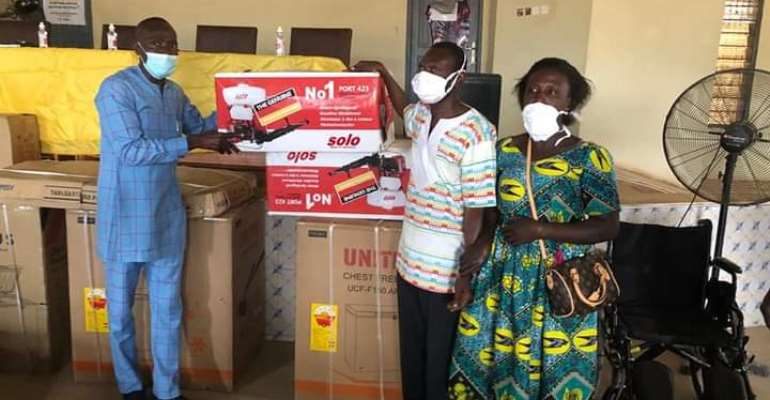 The District Chief Executive for Adansi Akrofuom District Assembly Honourable Maurice Jonas Woode on behalf of the Government of Ghana has presented to 18 Persons with Disabilities in the District.

The items range from Deep Freezers, Knitting Machines, Spraying Machine, wheel chair and Industrial Sewing Machines at a cost of over GH₵17,000.

Forty three (43) other persons were given educational support whiles the Assembly supported a hundred and fifty five (155) people to renew their Health insurance.

Currently, the district has 439 registered PWDs.

Briefing the media after the presentation, the DCE said the gesture was from the Assembly’s share of the Common Fund.

The DCE however advised persons with Disability to join their various groupings for easy identification.

District Coordinating Director Ebenezer Douglas Ntiamoh advised the PWDs that being disable does not mean they are not able therefore they should make use of the items giving them to help improve their lives and the lives of their families.

The Secretary of the Akrofuom Chapter of Ghana Federation of Disables Sarah Tieku praised the District Chief Executive for the disbursement.

She added his voice to calls for beneficiaries to use the items for their intended purpose in order to sustain their livelihoods.

Mrs.Tieku appealed to Government and other stakeholders including the media to create a congenial environment for persons with Disabilities to have voice. It would be recalled that this is sixth time the Assembly has disbursed its share of the Common Fund to beneficiaries since the DCE assumed office in 2018.

An immobilized young girl who received a wheel chair lauded the Assembly for coming to her aid. She shared her anecdote as to how she used to be carried in other to move to places.