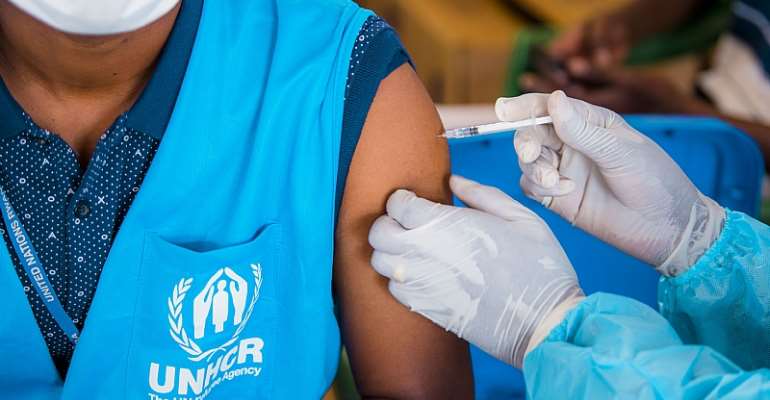 African countries must include all migrant populations in their vaccination plans. - Source: Thierry/Anadolu Agency via Getty Images

Migration is increasingly recognised as a determinant of health . Research shows that, in many cases, cross-border migrants arriving in new countries are healthier than the host population. But the advantage often falls away as non-nationals encounter discrimination and challenges in accessing documentation, support services and employment.

The health and wellbeing of all individuals within a country's borders must be addressed. But African states have failed to design and implement migration-aware health systems and responses. Many non-citizens, asylum-seekers and refugees are excluded from public health programmes.

The impact of such exclusions is now playing out. COVID-19 illustrates how refugees , asylum seekers, internally displaced people and migrants are being left out of pandemic preparedness plans , including national vaccination programmes.

Evidence shows that the vast majority of migrants are currently excluded from state-based COVID-19 vaccine rollout programmes. These forms of exclusion are likely to have far-reaching public health implications. To effectively reduce the spread of COVID-19, everyone must be vaccinated. Otherwise the virus will continue to spread while new variants emerge.

Some countries do include migrant populations. But the International Rescue Committee (IRC) reported in May 2021 that 60% of countries receiving their vaccines through COVAX had excluded refugees or internally displaced populations from their national plans.

We have been conducting research exploring access to COVID-19 vaccines across the continent. Our findings and a case study of South Africa highlight the issues of vaccine nationalism, vaccine exclusion and hesitancy and their likely effect at the population level.

Exclusion and violation of rights

Restricted access to vaccines is one clear example of discrimination against migrants. Not all migrants are undocumented and not all who are undocumented are vulnerable. But the exclusion of specific groups on the basis of citizenship, immigration or documentation status violates their human right to health , and affects the success of any vaccination programme.

Our investigation highlighted how migrants and refugees are being excluded.

First, migrant populations have simply not been included or have been ignored in vaccination rollout plans of many states. Few vaccine programmes across Africa make it explicit whether – and how – various migrant groups will fit into the rollout. For example, an internal WHO report in May 2021 noted that in Nigeria, there are concerns that over 2.7 million internally displaced people are at risk of being completely ignored in the current vaccine plans.

Second, even where non-nationals are explicitly included in plans, such as in Kenya and Senegal , they may face barriers. For example, in Kenya, refugees are fearful of coming forward and accessing state services such as public healthcare. The same WHO report noted that Kenya might exclude hundreds of thousands of refugees through a disconnect between policy and practice.

The risks of arrests, detention and deportation are significant in many states. If people don't feel safe, COVID-19 vaccination programmes will be less effective.

There are nonetheless notable exceptions on the continent – Rwanda, Cameroon and Senegal being three. For example, Senegal and Cameroon are allowing refugees to register in designated health facilities and city councils . Rwanda was one of the first 20 countries worldwide to begin vaccinating refugees and asylum seekers alongside citizens . The national response plan prirotises asylum-seekers and refugees alongside healthcare workers and key civil society and community members.

The case of South Africa

Exclusion, barriers to access and discrimination can be seen clearly in southern Africa, and specifically South Africa. The region has diverse historical and contemporary migration patterns. South Africa has the highest rates of cross-border migration . Only 7% of the South African population is estimated to have been born in another country.

Due to an increasingly restrictive immigration regime and a seriously compromised Home Affairs Department, many migrants in South Africa struggle to regularise their stay. As a result, those who start off with work permits or asylum-seeker permits often find themselves – through no fault of their own – without valid documents .

For refugees and migrants in South Africa with no papers, the consequences of being undocumented are far-reaching. They are unable to access formal employment and bank accounts, and have challenges accessing basic healthcare . Undocumented migrants live with the enduring threat of arrest and deportation .

Where the vaccination rollout requires an identity number, passport number or refugee permit to register there is no option for those who do not have these. Furthermore there is no clear directive of how people who are undocumented – including South African citizens – can register for vaccination.

The South African government has included refugees and asylum-seekers with documentation in the country's vaccination rollout.

Finally, a response to vaccine hesitancy within local communities and migrant groups on the continent demands collective action between states, international humanitarian organisations and civil society. In addition to a mistrust of vaccinations themselves, hesitancy can take the form of a fear of being treated badly due to anti-foreigner attitudes, or fear of arrest or deportation.

For example, in the Central African Republic, rumours have been circulating about “foreigners” spreading the virus and even fears that international aid agencies are creating the virus as a way to make money . In Rwanda, rumours and the spread of misinformation have gained traction in certain areas .

More strategic thinking is needed to raise awareness, build trust and outline measures of protection for those who fear coming forward for the vaccine. As the International Organisation for Migration has emphasised, reaching out to migrant communities, in tailored languages and through relevant communication channels, is central to creating vaccine demand.

One approach would be to include civil society organisations, community groups and religious leaders in vaccine rollout programmes.

A clear way of improving the safety of everyone is through firewalls. These provide legal protection for undocumented people, ensuring they face no penalties when accessing state health services. Any information collected is used by the health system only.

According to Dr Matshidiso Moeti, WHO Regional Director for Africa, thus far “… the continent has received just 1.7% of the world's 3.7 billion doses, and … only 1.5% of the population have been fully inoculated” .

Not only does the continent need more vaccine doses, but countries must also include all migrant populations. Failure to ensure access for all undermines national responses to COVID-19. The consequences spread far beyond those nations.

There is no place for hypocrisy. The international community cannot be called out on vaccine nationalism if states do not plan for an inclusive national response themselves. Without vaccinating everyone, nobody is safe.

Jo Vearey receives external research funding, including from UK Research and Innovation (UKRI), the European Commission, AmplifyChange, the International Organization for Migration (IOM) and the World Health Organization (WHO).

Nicholas Maple and Rebecca Walker do not work for, consult, own shares in or receive funding from any company or organisation that would benefit from this article, and have disclosed no relevant affiliations beyond their academic appointment.

By Rebecca Walker, Research Associate at the African Centre for Migration & Society, University of the Witwatersrand And

Jo Vearey, Associate Professor, University of the Witwatersrand And