Largest ever criminal trial opens at the Vatican 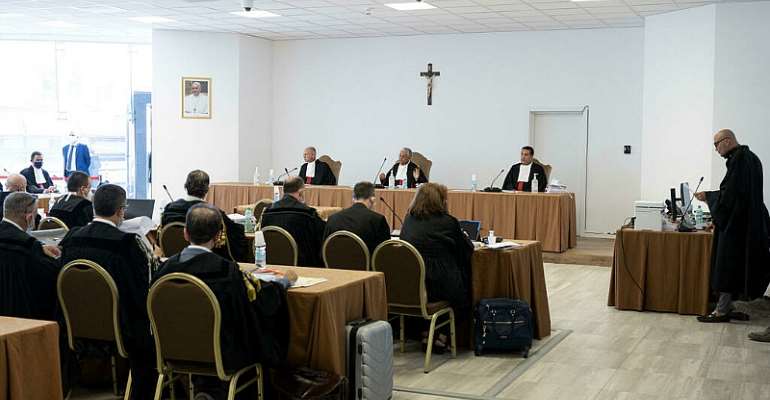 The largest criminal trial in modern times has opened at the Vatican on Tuesday. 10 people, including a once powerful cardinal, are having to answer for multiple charges including fraud, embezzlement, corruption and abuse of office. The trial is the result of a two-year investigation into a Vatican investment into the London property market that cost 350-million-euro.

He attended the first hearing of the trial on Tuesday and said he wanted to comply with Pope Francis' wishes and remains “obedient” to him. The pontiff removed the cardinal's immunity and fired him in 2020 for alleged nepotism and so that he could be sent to trial.

Embezzlement and abuse of office
“He wanted me to be on trial, and I'm coming to the trial. I'm serene. I feel tranquil in my conscience,” Cardinal Angelo Becciu said. He showed up at the trial wearing a plain black clergyman's suit and a large cross hanging around his neck.

Becciu's charges include embezzlement and abuse of office related to the purchase of a London property in the elegant area of South Kensington in London with donations given to the Catholic Church. He has always denied any wrongdoing. He is also charged with funnelling money and contracts to companies or charitable organisations controlled by his brothers on their native island of Sardinia.

The once cardinal, now stripped of all his power, and his former secretary, Monsignor Mauro Carlino, were the only two defendants who attended the trial, which dealt mainly with procedural matters in the first hearing which lasted around 8 hours. The other 8 defendants, who exercised the right to be defended in absentia, include the former head of the Vatican's Financial Unit, Swiss lawyer Rene' Bruelhart, two Italian investment bankers, Raffaele Mincione and Gianluigi Torzi, and a woman Cecilia Marogna, who was hired by Becciu as an external security consultant.

London real estate
The London real estate deal dates back to 2014 when the Secretariat of State invested initially around 200-million-euros, much of it Church donations, into a fund operated by Raffaele Mincione, half the sum was to secure 45% of the London luxury property at 60 Sloane Avenue and the remainder for other investments.

Soon it became apparent to the Vatican the investments would not only not be profitable but the losses would be huge.

Due to still existing Covid restrictions and the number of defendants, lawyers and journalists, the Vatican held the trial's first hearing in a hall converted into a courtroom in the Vatican museums. Defence lawyers lamented they hadn't had time to digest about 28,000 pages of documents recently released by Vatican prosecutors and chief Judge Giuseppe Pignatone agreed to adjourn the trial to a much later date setting the next hearing for Oct. 5.

Since the start of his papacy in 2013, Pope Francis has been working hard to clean up financial mismanagement and nepotism inside the Vatican. In April he reformed the Vatican criminal code removing privileges for cardinals and bishops so that they too can be held accountable if accused of wrongdoing. Pope Francis said the reform was a priority to ensure that all members of the church must be judged equally without anyone receiving any special privileges.

MMDCE appointments shouldn't be seen as job for the boys' - ...
44 minutes ago