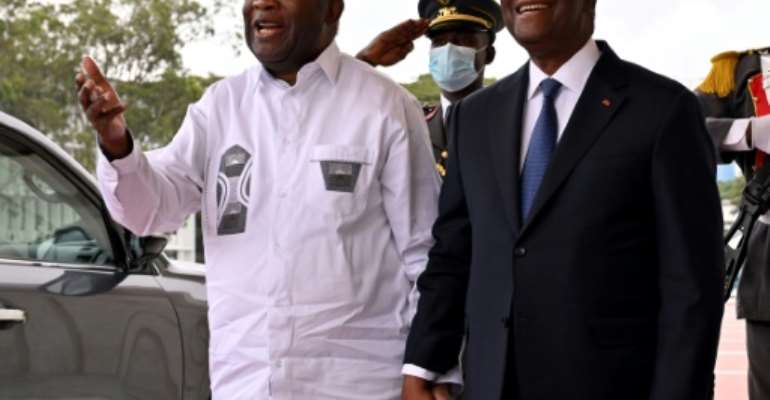 Ouattara referred to Gbagbo as his 'younger brother, a friend for decades', while his predecessor made a point of referring to him as 'Mr President'. By Issouf SANOGO (AFP)

Ivory Coast's press on Wednesday gushed over an upbeat meeting between President Alassane Ouattara and Laurent Gbagbo, the main antagonists in the West African country's devastating conflict a decade ago, while warning that the "hard part" lies ahead.

"A good-natured and moving ambiance certainly augurs well for happy days to come" for Ivorians, the daily Soir Info wrote.

The two men embraced warmly ahead of their half-hour meeting at the presidential palace on Tuesday, after which Ouattara said that the turmoil that claimed more than 3,000 lives was "behind us".

An opposition newspaper, Nouveau Reveil, said the encounter provided "strong images to say that only forgiveness and tolerance can resolve a crisis, however serious".

Ouattara, 79, referred to 76-year-old Gbagbo as his "younger brother, a friend for decades", while his predecessor made a point of referring to him as "Mr President".

The nod was laden with significance, as the crisis was sparked by Gbagbo's refusal to concede defeat to Ouattara in the 2010 presidential election.

The ensuing conflict was brutal, with both sides accused of atrocities. After Gbagbo was ousted, he was flown to The Hague to face charges of crimes against humanity, of which he was eventually acquitted.

He returned to the former French colony, the world's top cocoa producer, in June with Ouattara's blessing.

"For Gbagbo, it's a matter of settling the past, having a role in the present and preparing the future," Alabro added.

All eyes were on the historic meeting for indications as to whether the two men would indeed move on to reconciliation in what was once a regional beacon of stability.

"The hard part starts now," the Nouveau Reveil wrote. "Those who are raising high hopes for the people and friends of Ivory Coast can't get it wrong now."

It urged "concrete actions" towards reconciliation.

Notably, Gbagbo did not miss the chance to send a political message on Tuesday, calling for the release of prisoners held since the 2010-11 conflict.

'Men of their word'?

And since his return he has maintained an opposition profile, criticising Ouattara's re-election to a third term last year, seen by many as unconstitutional.

The 79-year-old former international banker won a landslide victory, but the credibility of the win was undermined by an opposition boycott.

In the runup to the vote, scores of people died in clashes with police.

A maths professor in Bouake, the country's second biggest city, had his doubts.

"Is it a sincere meeting, or just play-acting to distract us again?" asked Herve Konan.

A law student in Bouake, Didier Sery, chimed in: "For once they need to show us they are men of their word, because we are tired of their personal quarrels."