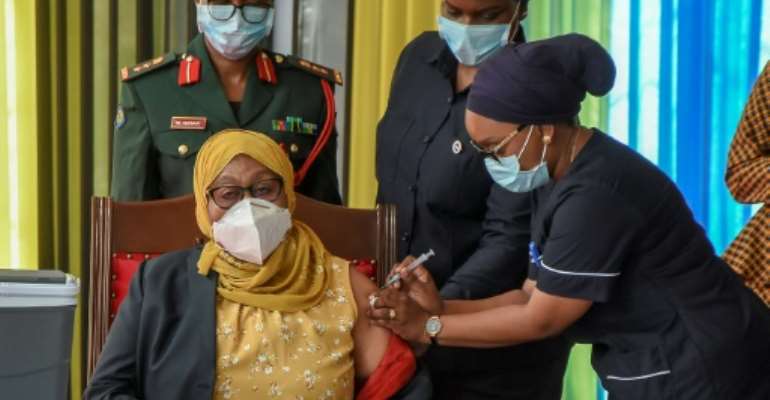 Tanzania's President Samia Suluhu Hassan was given the vaccine live on television. By STRINGER (AFP)

Tanzania's new president launched a coronavirus vaccination drive Wednesday in one of the last countries in the world to start inoculating its people, reversing the policies of its deeply Covid-sceptic late leader.

The East African nation had until recently been an outlier in the global fight to tackle the coronavirus -- resisting measures such as wearing masks, curfews and lockdowns.

Former president John Magufuli was one of a handful of leaders who dismissed the gravity of the pandemic and shunned foreign-made vaccines in favour of the healing power of prayer.

But since Magufuli's death in March, his successor President Samia Suluhu Hassan has been promoting measures to curb the spread of the virus in the country of 58 million people.

The mass vaccine rollout started with Hassan, 61, getting her jab after a ceremony broadcast live on television in the financial capital Dar es Salaam.

"There are people who resist vaccination but there are a lot of people waiting for the vaccines," she said.

Tanzania will give priority to special groups of frontline workers, the elderly and those with underlying diseases.

It received just over one million single-shot Johnson & Johnson vaccines from Covax, the global initiative that seeks to provide equitable access to doses for lower-income countries.

Plans are also under way to procure doses from Pfizer/BioNTech, Moderna and Chinese vaccine makers Sinovac and Sinopharm, the government said.

"I'm a mother of four children, grandmother to many, wife and most importantly, the president and commander in chief of the Tanzanian armed forces," Hassan said.

"You can imagine how many people depend on me from that chain. In that context, I cannot put my life at risk if the vaccines are not safe."

Anti-vaccine sentiment, often fuelled by conspiracy theories and mistrust, has played out across Africa and limited the uptake of jabs.

Tanzania, Eritrea and Burundi were the only countries on the continent yet to begin vaccinating their citizens against Covid-19.

US ambassador Donald Wright, whose country donated the J&J vaccines via Covax, said on Twitter that the development was "a historic moment that hopefully marks the turning of the tide against the Covid-19 pandemic in Tanzania".

The government stopped releasing Covid-19 data in April 2020, with Magufuli saying that issuing the figures was scaring people.

But the new administration has said it is currently battling a third wave of infections.

The health ministry said last week that the number of Covid cases had increased to 858 since the start of the third wave and 29 people had died, but did not give a timeframe.