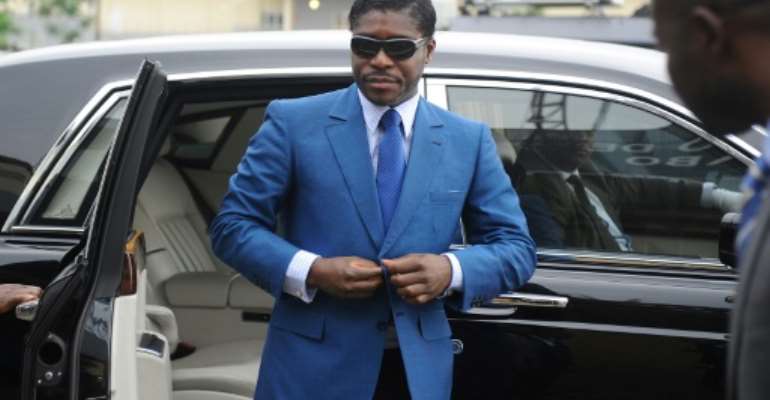 Teodoro Obiang was accused of diverting state assets into his own bank accounts to fund a luxurious lifestyle. By JEROME LEROY (AFP/File)

The rejection by the Court of Cassation of the ultimate appeal by Teodorin Obiang, the son of Equatorial Guinea President Teodoro Obiang, marks the first final conviction in France of a leading figure in a string of such investigations in progress for over a decade.

The court threw out Obiang's final appeal against his suspended three-year prison sentence, a 30 million euro ($35 million) fine and the confiscation of all assets seized in the investigation that had been ordered by a lower appeals court in February 2020.

His assets could now be redistributed to the oil-rich but poverty-stricken West African country's people under a new French law passed this month.

The case against Obiang, whose father has ruled the country since 1979, was the most advanced of several opened in France against mainly African elites over ill-gotten assets.

Investigations against such assets in France were launched from 2010 after complaints launched by NGOs Transparency International and Sherpa. Teodorin Obiang was first convicted in France in 2017.

"With this decision, the French judicial authorities have confirmed that France is no longer welcoming the money embezzled by senior foreign leaders and their entourage," said Patrick Lefas, president of Transparency International France.

"The assets acquired in France with dirty money will be confiscated and their owners prosecuted and convicted," he added.

Franceline Lepany, president of Sherpa, hailed the verdict as "historic", saying it showed the success in strengthening law "to put an end to a practice which has until now been tolerated in France".

The rejection of the appeal came days after Equatorial Guinea closed its embassy in London following a move by Britain to impose sanctions against Teodorin Obiang.

Britain accused him of siphoning off state assets into his own bank accounts to fund a luxurious lifestyle, including mansions around the world, luxury cars and the crystal-covered glove that Michael Jackson wore on his 1987-89 "Bad" tour.

Teodorin Obiang tried to pass off his Avenue Foch building as a diplomatic mission. By ERIC FEFERBERG (AFP)

Teodorin Obiang, 52, who oversees defence and security in the country, has long been notorious for his luxurious tastes and extravagant holidays.

French judicial authorities have estimated at 150 million euros the amount he laundered in France to build up assets including cars valued at 5.7 million euros with three Bugattis, a Rolls-Royce and two Maseratis.

Among the seized property is a luxurious building on the upscale Avenue Foch in Paris that boasts a cinema, hammam and marble and gold water taps, with an estimated value of 107 million euros.

Equatorial Guinea disputed the confiscation of the building before the International Court of Justice, arguing that it served as the country's embassy in France.

But the UN court sided with France which said the building was merely Teodorin Obiang's residence with no diplomatic purpose.

New legislation passed by parliament on July 20 should see the value of the assets redistributed to the people of Equatorial Guinea rather than being absorbed into the French budget.

It was not immediately clear what mechanism would be used to divvy up the wealth among the poorest sections of society in the oil-rich country.

Teodorin Obiang was the first to be convicted and cases are ongoing against the families of Gabon President Ali Bongo, the son of long-serving ruler Omar Bongo, and Republic of Congo President Denis Sassou Nguesso.

Rifaat al-Assad, 83, dubbed the "Butcher of Hama" for allegedly commanding troops who put down an uprising in central Syria in 1982, lives in France but is unlikely to serve his four-year sentence given his advanced age.

He is currently appealing the conviction.