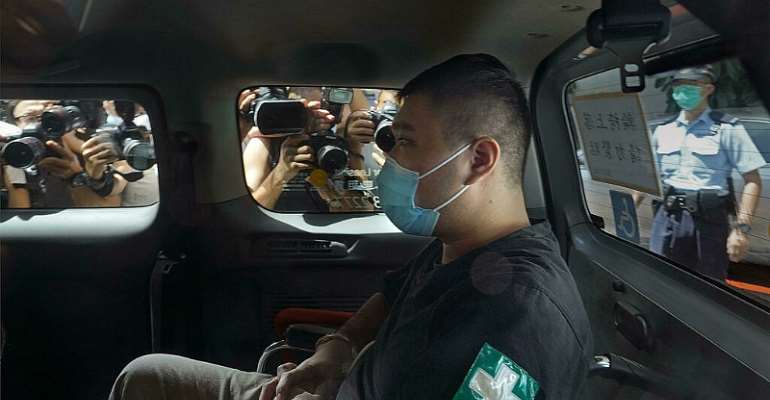 The Hong Kong High Court convicted a former waiter of "terrorism" and "inciting secession" in the first trial conducted under a national security law that was imposed by China to stamp out dissent. The watershed ruling marks a new phase in the city's changing legal landscape that is becoming more aligned with that of communist-ruled mainland China.

Tong Ying-kit, 24, was charged with terrorism for driving a motorbike into three police officers and secession for flying a protest flag during a rally on July 1 last year, the day after the national security law was enacted.

The flag, attached on his backpack, read "Liberate Hong Kong, revolution of our times", a ubiquitous slogan during the huge and often violent pro-democracy protests that convulsed the city two years ago.

The case was first heard on the 23rd of June and took six session. It was heard without a jury, which signifies a departure from Hong Kong's common law tradition. Three judges, handpicked by Hong Kong's Chief Executive Carry Lam to try national security crimes delivered the final verdict.

The written judgement, which "reiterates" that "the legal principles such as the burden of proof, the standard of proof, the presumption of innocence, the right of silence and the right to a fair trial," seems to reflect the difficulties the judges had with the vastly decreased independence of Hong Kong's legal system.

They admitted it was "the first case involving offences under the National Security Law (NSL) and that therefore there is no precedent,".The  procedure of "trial by a panel of three judges instead of by a jury" was also challenged by the defence.

They then try to support the vague and arbitrary terms stated in the NSL by examples from existing cases. They even went as  far as citing the 1881 "R(egina) v Most" case, where, ironically, the British government charged that "publication and circulation of a newspaper article could be an encouragement ... to persuade to murder,". This after a vitriolic article published in a German language newspaper in London allegedly contributed to the death of Russian Tzar Alexander II and carried out by a group of radicals organized under the name "Narodnaya Volya"

In the end, they conclude that flag's slogan "Liberate Hong Kong, Revolution of our Times" was "capable of inciting others to commit secession".

The charge of terrorism was met because crashing his motorbike into police officers "seriously jeopardised public safety or security".

Tong will be sentenced at a later date, and faces ife in prison.

More than 60 people have been charged under the law, including some of the city's best-known democracy activists such as Jimmy Lai, owner of the now-shuttered Apple Daily newspaper.

Most are now in jail awaiting trial.
Legal analysts said Tuesday's ruling showed Hong Kong's judiciary is adopting a broad interpretation of the security law and that the courts would become more like those in authoritarian mainland China, especially for political cases.

"The whole system, from the administration to the law enforcement to the judiciary, has reached an alignment," Eric Lai, an expert on Hong Kong's legal system at Georgetown Law School, told French news agency AFP.

Surya Deva, an expert at City University of Hong Kong's law school, told AFP that "all institutions and legal processes will be geared to achieve certain pre-defined outcomes" in national security-related cases.

In mainland China, opaque courts answer to the Communist Party and conviction is all but guaranteed, especially in political or national security cases.

Hong Kong maintains an internationally respected common law system that is the bedrock of its business-hub status.

Days of Tong's trial were spent on the flag, with university professors called by both sides to explain the slogan's meaning.

Defence experts argued the slogan meant many things to different people in what was a leaderless protest movement that included a broad spectrum of views, from people advocating genuine independence to those wanting greater democracy and police accountability.

The prosecution argued that the slogan had clear separatist connotations and that Tong's decision to drive his bike into the police met the security law's definition of terrorism.

Bail denied
Tong's case was unusual in that he was one of the only people arrested under the security law who was accused of an explicitly violent act.

The vast majority of those awaiting prosecution were arrested for expressing political views that authorities say are now illegal.

China says it was needed to restore stability after 2019's protests.

The security law has since radically transformed the political and legal landscape of the city, which China promised could keep key liberties and autonomy after its 1997 return from British colonial rule.

China has jurisdiction over some cases, toppling Hong Kong's legal firewall, and has allowed its security agents to operate openly in the city for the first time.

It also allows for cases to be tried by judges instead of juries and bail is largely denied for those arrested.

Tong pleaded not guilty to all charges and did not take the stand during the trial.