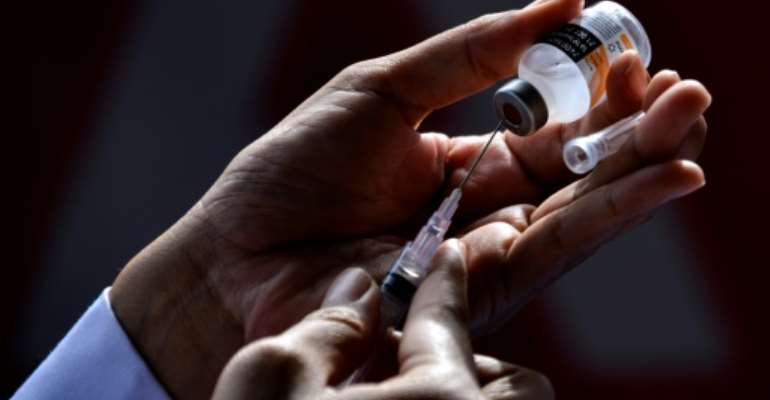 Around half of the donated Oxford-AstraZeneca vaccine doses will be dispatched to Nairobi this week, Downing Street has said. By CHAIDEER MAHYUDDIN (AFP/File)

Britain announced Wednesday it will begin donating millions of coronavirus vaccine doses around the world, including to various Commonwealth countries, following its pledge to provide 100 million jabs globally by next June.

Foreign Secretary Dominic Raab said the ramped up rollout of an initial nine million inoculations, to get under way Friday, will go to Kenya, Jamaica and several Asian nations.

"They will go to countries, vulnerable places like Laos and Cambodia, partners like Indonesia, Malaysia (and) a range of Commonwealth countries from Kenya to Jamaica," he said.

"This demonstrates we're not just doing it because it's in our own interest. It shows global Britain as a life-saving force for good in the world."

Britain has committed to sharing 100 million Covid-19 vaccine shots by the middle of next year through the Covax programme -- which aims to ensure fair distribution of jabs -- and directly to individual countries.

Prime Minister Boris Johnson will formally agree an initial offer of 817,000 doses for Kenya when he meets President Uhuru Kenyatta later on Wednesday.

The pair are due to host a fundraising summit in London on Thursday -- attended by other world leaders as well as business, charity, education and youth representatives -- focused on global education efforts.

Around half of the donated AstraZeneca vaccine doses will be dispatched to Nairobi this week, Downing Street said ahead of the meetings.

"As friends and allies, we are sharing UK vaccine doses to support Kenya's fight against the pandemic," Johnson added in a statement.

Richer nations have faced criticism for the inequitable provision of vaccines to poorer nations, and for failing to lift intellectual property rights on jabs. By Adrian DENNIS (AFP)

The UK commitments stem from G7 pledges, unveiled at a UK-hosted summit in June, to provide at least one billion doses internationally through sharing and financing schemes.

The United States has said it will donate 500 million jabs to 92 poorer nations, while European Union members have agreed to donate at least 100 million by the end of 2021.

Richer countries, in particular Britain, have faced criticism for failing to start donating to poorer countries which are lagging far behind in their vaccination drives.

The UK has fully jabbed more than 70 percent of adults, and the government lifted all remaining pandemic curbs on day-to-day life in England last week.

Daily infection rates in Britain appear to be in decline -- boosting hopes of a strong economic recovery.

The International Monetary Fund on Tuesday forecast that Britain's economy would grow by seven percent this year, the joint fastest of any G7 country alongside the United States.

But the IMF also warned that the uneven distribution of vaccines is widening disparities as rich countries pick up speed and leave developing nations behind.

The 54-nation Commonwealth, of which Kenya, Jamaica and Malaysia are members, has called for vaccine rollouts to be speeded up in small states, and warned of the economic fallout of the virus in the Caribbean, Pacific and Indian Ocean regions.

Last week it said member states lost up to $345 billion in trade last year as the pandemic triggered a global economic slump.