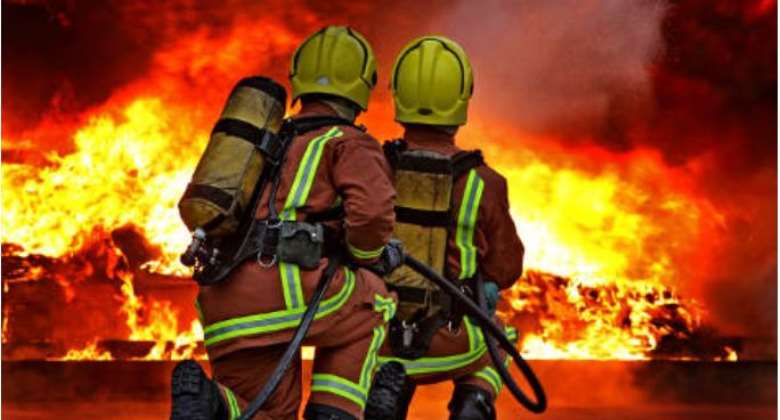 A fire outbreak at Moshie Zongo, a suburb of Kumasi in the Ashanti Region on Tuesday sadly left two kids dead.

The deceased, Tariq Alhadar, just two years of age, and his nine-month-old younger sister, Salamatu Alhadar, were reportedly trapped in their room when it caught fire.

According to information gathered, while the Ghana National Fire Service (GNFS) is working with the Police to identify the cause of the outbreak, the bodies of the two children have been deposited at the morgue for autopsy,

Speaking in an interview after the incident, Divisional Officer (DO) III Desmond Ackah, Ashanti Regional Public Relations Officer of the GNFS said they received a distress call on Tuesday morning of a fire outbreak.

Despite swiftly dispatching tenders stationed at the Kwame Nkrumah University of Science and Technology (KNUST) to bring the situation under control, the kids sadly could not be saved.

He bemoaned the fact that some youth in the area made the work of the tenders difficult through attempts to stop them from doing their work for no reason.

He said but for those delays, they could have prevented the loss of life.

“Maybe, the situation could have been saved if the fire tenders had been allowed to the scene on time,” he told GNA.

For Mr. Kofi Nti-Kyei who is Assembly Member for Moshie Zongo, he said the entire Moshie Zongo community is devastated by the incident.

“These are innocent kids who were expected to grow up and contribute their quota to nation building,” added.