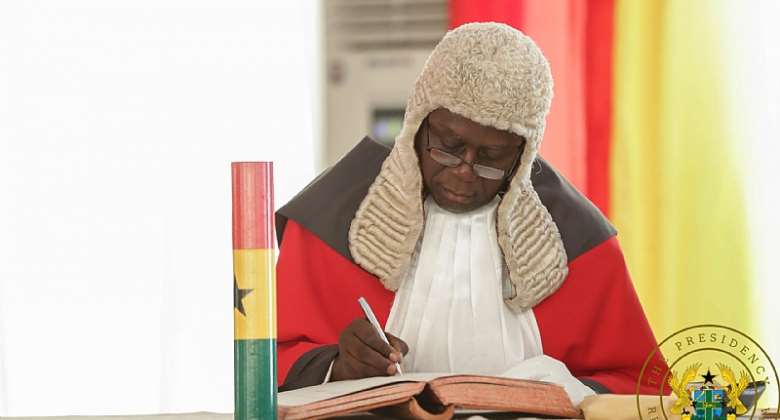 When I first read the $5 million bribery allegation against the Chief Justice (CJ) on Ghanaweb, I quickly discounted it because some of the details were inconsistent. However, as more details become available from media reports, it became clearer to me that, though the allegation still remains one lawyer’s word against the CJ, there are some matters arising therefrom that need urgent attention as they pertain to the administration of justice by the highest court of the land.

In this article, I will analyse some of the matters arising and hope that the powers that be, particularly the CJ and others mentioned in the facts that are in the public domain so far, may be minded to clarify them as appropriate and in the name of the administration of justice.

The first matter arising was from the four-page statement in response to the allegation by Mr Akoto Ampaw (the current Attorney for the defendant, Nana Ogyeedom Obranu Kwesi Atta VI), issued to the mass media dated July 19, 2021. Under point three of the aforementioned statement, it was stated among others as follows:

“On March 31, 2021, the Supreme Court granted our application by a four to one ruling. Incidentally, the Chief Justice, who according to lawyer Afrifa’s yarn, wanted me to be engaged as a lawyer in the matter to facilitate an outcome favourable to my client, was the dissenting judge out of a panel of five. The records are there for anyone to access, including the media” (see, “US$5 million bribery allegation: Akoto Ampaw breaks silence”, Ghanaweb, July 19, 2021).

The question is, how come the decision was 4 to 1 majority when we are told that the panel was increased from 5 to 7 members on February 2, 2020? This is critical because according to court records made public on Myjoyonline, the CJ was not on the original five-member panel but became a member after it was expanded to 7. The original five members were, JSC Dotse (presiding) JSC Appau, JSC Pwamang, JSC Marful-Sau and JSC Kortey. According to Nana Kwesi Atta, in his petition to the CJ dated September 6, 2020, they were informed in court on February 2, 2020 that the panel had been expended to 7. So why did a 7-member panel from February 2, 2020 give a 4-1 majority decision on March 31, 2020, over one year after the panel was increased from 5 to 7?

It is important to also note that as far back as January 24, 2020, the presiding justice, JSC Dotse wrote a memo to His Lordship, the Chief Justice with copy to the other four panel members for permission to expand the membership from 5 to 7 because and I quote from his aforementioned memo.

“The resolution of this issue in the Ruling might necessitate a departure from the settled authorities of the court, we respectfully crave your indulgence to enhance the panel to seven (7) to enable us rehear the matter to be in a better position to deal with this issue comprehensively.” (see, “Alleged $5m bribe: Why Chief Justice was asked to expand panel hearing chief’s case”, Myjoyonline, July 26, 2021).

Further details of JSC Dotse’s memo of January 24, 2020 also has matters arising therefrom. According to some of the details, the suit number JS/131/2019 instituted by the Chief against Ghana Telecommunications Company Ltd and Lands Commission had been done and dusted and was due for judgment on January 22, 2020 but postponed to 5 February 2020 due to the Christmas holidays. However, at a judgement conference on January 23, 2020, it was decided that the panel had to be expanded to 7 for the reason quoted above.

The question the SC court must answer are: Can’t a SC panel of five properly constituted make a ruling that departs from settled authorities and therefore it has to be expanded to 7? Is that not waste of judicial time and scare resources after the suit had been heard and pending judgement?

I disagree with the reason given for the decision to expand the panel to 7 because the SC is a master of its own rules and all SC panels (whether 5, 7, 9 or more) have powers not to follow settled authorities provided there are good reasons for that departure. Therefore, there was no need to expand the panel to 7 in order to depart from the settled authorities as claimed by JSC Dotse in his memo to the CJ.

Another very critical matter arising from the details put out by Myjoyonline is the production of new evidence by the appellant, Ghana Telecommunications Company Ltd. This is also critical because an appellate court is not a trial court to accept new evidence, unless at both the trial court and the first appellate court, no one could reasonably have known the existence the new evidence being provided at the SC or if such evidence is not allowed there will be miscarriage of justice. In other words, the new evidence had probative value and for that reason it must be allowed. For these reasons, the question for Ghana Telecommunications Company Ltd and the Lands Commission is, why was the new evidence not produced at the High Court (the trial court) or Appeal Court? Who had the new evidence and could its existence not reasonably have been known by one or both defendants at the trial court and appellants at the Appeal Court until at the SC?

What is concerning is that the new evidence that appellants relied on for appeal at the SC was found in their own archives. Again, since this evidence was very important to their case at both the trial court and the Appeal Court, why they failed to provide such crucial evidence is a mystery. Was it negligence or incompetence o deliberate sabotage?

Does this not give credence to Nana Kwesi Atta’s suspicion that the new evidence has been forged?

I understand from the response of JSC Dotse to Nana Kwesi Atta’s petition to the CJ that, staff of the Land Commission, which is the third Defendant in the case suppressed the new evidence (they deliberately hid the evidence). If that is the case, what did the panel do about this criminal act? Has the SC not got powers to order investigations into such criminal act, or refer the matter to the appropriate body or office such as CHRAJ to conduct investigations into the matter to identify those who deliberately hid the evidence and sanction them? Deliberately hiding probative evidence from court should be contempt of court as well as perverting the course of justice and should be a crime that should not be allowed to go unpunished.

The other important matters arsing was some of the contents of Nana Kwesi Atta’s petition of September 6, 2020 to the CJ expressing his concerns about how the case was being handled by the SC. According to him, and I quote from his petition:

“We recall that the first time an aspect of this case came before the court as on 8 May 2020 in an application for certiorari, where the 1st Defendant (Appellant) sought to get our family to return monies paid to our family on the orders of the Court of Appeal, Cape Coast. Your Lordship, who was not Chief Justice then, was part of the panel. We recollect vividly that your Lordship’s first comment was which village land could sell for as much as that sum of money.”

The question is, what is the value of village land? That depends on a number of factors, including what is on and could be beneath the land, the size of the land, what the land was and is being used for, how many people depend on the land for their livelihood, where the land is situated, etc. For this reason, I disagree with the then JSC and now CJ that his comment in court, if true, was inappropriate and gives room for the Nana Kwesi Atta’s suspicion of prejudice or bias against them. For the records, the CJ was sworn into office on January 7, 2020.

It is also interesting to note the response of JSC Doste to the above allegation by Chief. In a second Memo to the CJ dated October 1, 2020 responding to the petition, he stated and I quote:

“Third, I do not recall His Lordship, the Chief Justice, making the comments ascribed to him before he became CJ on 5 May 2018 as being alleged. In any case, such a comment is entirely not prejudicial and has not been the basis of the decision of the panel then and now.”

Another matter arising from the Myjoyonline documents is an allegation by Nana Kwesi Atta in his petition to the CJ. According to him and again, I quote from the petition.

“In the case involving the Board of Governors, Achimota School and Nii Ako Nortei II, Platinum Equities Ltd and the Lands Commission given on 20 May 2020, Justice Doste said at page 63 as follows: We found the suppression of vital evidence of the 3rd Defendant herein not only in this case but also in an unreported case, Suit No. CM/131/2019 dated 28 April 2020, entitled Ogyeedom Obranu Kwesi Atta VI vrs Ghana Telecommunications Company Ltd and Another, where we had to deal with issues of suppression of vital and material evidence by officials of the 3rd Defendant which if available would have put the evidence before the court for adjudication.”

In his response to the above allegation in his aforementioned Memo to the CJ of October 1, 2020, JSC Doste stated that, “Fourthly the quotation ascribed to me in a Board of Governors, Achimota School v Nii Ako Nortei II and 2 Others has been taken completely out of context, and amounts to lack of understanding of an appreciation of my judicial oath, training and practice. In this respect, I wish to react as follows:”

He provided seven other reasons to explain why he made reference to this case in an unrelated case, which are too long to repeat. Please read it on Myjoyonlie as referred to earlier.

The question is, is it ok for a judge to make reference to a case that is still pending before him in the judgement of an unrelated case even if they are both land disputes? I do not think so and disagree with JSC Dotse that his reference is not prejudicial. Yes, in his eyes and mind, it may not be but in the eyes and the minds of other parties to the case as well as the public, that may not be the case. I also appreciate that the suppression of evidence of probative value by staff of one of the Appellants is troubling, perversion of the course of justice and criminal but that should be left out till the judgement day of this case

In conclusion, with these facts on the case now in the public domain, there are more questions than answers on this matter. The judiciary must not only administer justice but justice must also been seen to be delivered.

The more we sink into debt and become poorer, the more money...
43 minutes ago