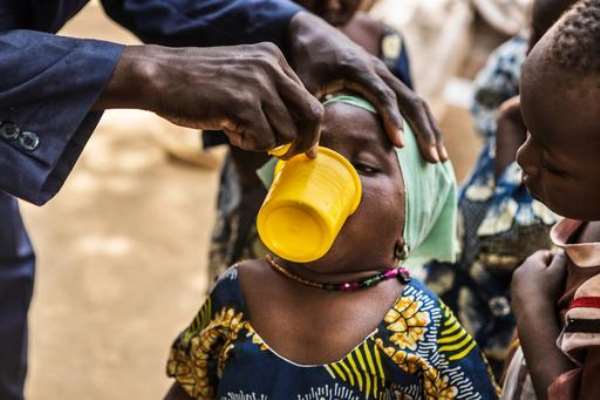 The seven days Seasonal Malaria Chemoprevention (SMC) exercise being carried out by the Upper East Regional Health Directorate of the Ghana Health Services has begun in earnest.

The exercise which is a collaborative effort of the Global Fund and the Ghana Health Services is targeted at children aged from three to 59 months.

The Regional Malaria Focal Person, Sydney Abililba who made this known to ModernGhana News in Bolgatanga, said about 2,300 personnel including volunteers have been trained, to dose 248,348 children in the age bracket within the region.

Mr Abiliba explained that based on the WHO research that has been conducted on the efficacy of the medication that will be used for the immunisation exercise, targeting children from 3 to 59 months, equivalent to 5 months.

He added that there is an acquired immunity from 0-3 months the mother of a child transfers to the baby through breastfeeding after three months, that immunity he noted is normally lost leaving the child prone to the hazardous nature of malaria hence, the need for SMC administration.

He indicated that the set target is chosen to ensure that the children are well protected against the seasonal burden of malaria in the rainy season.

He further threw more light on the chemical composition of the dose and why there is the need for the administration saying, the community volunteers that are being selected by the communities themselves are being trained by the health workers at the CHPS Compounds, Health Centres and hospitals at the Districts levels, serving as supervisors to the volunteers.

Mr. Abilba indicated that the volunteers have since been deployed across the various communities equipped with electronic App on tablets. He said they are also provided with raincoats, T’ shirts and Wellston boots depending on the terrain because of the season to move from door to door for the administration of the SMC doses to the vulnerable groups.

Mr. Abilba emphasised that the target age group children’s details will be captured however, children that are not well at the time of the exercise will be asked by the health personnel to be sent for treatment at the health centres or hospitals.

He stressed that such children will not be given the SMC dose because the exercise is strictly preventive not treatment.

As of the time of filing this report, Mr Abilba indicated that the day two of the exercise has seen 19 per cent of children given the SMC dose.

Gov't hands over seized rosewood to Trustees of National Cat...
49 minutes ago