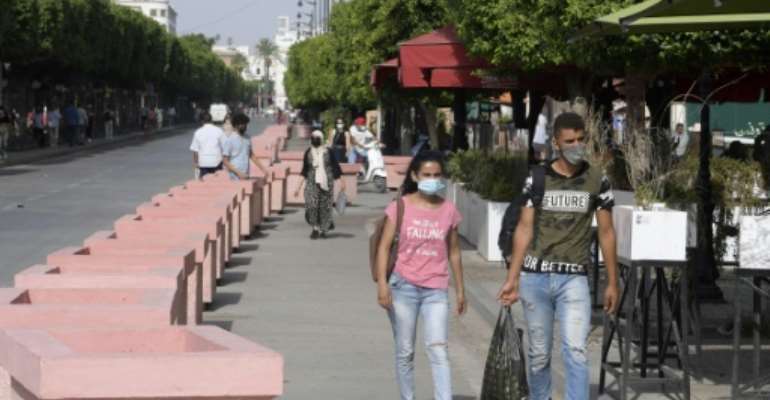 There is uneasiness among Tunisians as to what the future will hold after President Kais Saied plunged the country into political uncertainty in a power grab. By FETHI BELAID (AFP)

Since Tunisia's President Kais Saied plunged the country into political uncertainty in a power grab, an armoured vehicle has guarded the gates of the now suspended parliament.

But away from the legislature and the police roadblocks on the wide boulevards of Tunis, there are few outward signs of an intense political crisis -- and many have welcomed the president's orders.

Najet Ben Gharbia, a 47-year-old nurse, said she had been waiting "a long time" for such a move.

"There is still great poverty," Ben Gharbia said, describing the crippling inflation that has stripped the value of income, making red meat too expensive to buy. "People are miserable."

Thousands celebrated on streets after Saied's shock decision to sack the prime minister.

Surging rates of Covid-19 in the North African nation and the accompanying pandemic restrictions have hit the economy hard, adding to the woes of Ben Gharbia's family.

It is a common refrain among those on streets of capital AFP spoke to.

Tunisian police stand guard outside the parliament in Tunis on July 27, 2021. By FETHI BELAID (AFP)

Since clashes that erupted Monday in front of parliament between supporters of the president and backers of the Islamist-inspired Ennahdha party, the strongest group in the coalition government, calm has returned to Tunis.

But there is also uneasiness as to what the future will hold.

Some point out that Ben Ali also invoked the constitution in 1987 when he seized power, before turning to authoritarianism.

"We are a little worried about what may happen, to go back to the time of Ben Ali," said Mourtadha al-Saidi, a 19-year-old student.

"Now there is only one power, it is the president who has the executive power and the judicial power."

But with the country struggling amid dire health and economic crises, as well as the government paralysis caused by political deadlock, the temptation of a strongman appeals to some.

"What the president is doing is in our interest," said Mounir Mabrouk, 50, adding political parties had "done nothing except sell our property" to foreigners and wealthy elites.

But he also errs on caution, wary of the "irresponsible" closure of the Tunis bureau of Al Jazeera as a worrying sign.

"The people will never approve of a new dictatorship," he insisted.

A Tunisian man reads the newspaper on the Habib Bourguiba avenue in Tunis on July 27, 2021. By FETHI BELAID (AFP)

Others, such as pensioner Lassaad Mahouachi, sitting on a terrace with his friends, said he could not imagine a return to autocratic rule, using neighbouring Egypt as a comparison.

When Egypt's then military chief Abdel Fattah al-Sisi overthrew an elected Islamist government in 2013, they were put on trial on terrorism charges.

In Tunisia, the leader of the Ennahdha party, Rached Ghannouchi, came to "protest in front of parliament without being arrested," he said.

For taxi driver Hosni Mkhali, 47, action had to be taken -- especially to bring the cases of coronavirus under control, as the country struggles with one of the world's worst recorded death rates.

"All Tunisians are disgusted," he said. "It was the best time to act."

But he is also clear that Tunisians will hold Saied to his promise to choose a new prime minister.

People are now longer as fearful as they once were.

"We are waiting to see," he said. "Tunisia has changed. In the streets, it is no longer the Tunisians of (past president) Bourguiba or Ben Ali."