‘King Promise’ Akufo-Addo’s 88 hospitals & the national vaccine institute, should we believe the President? 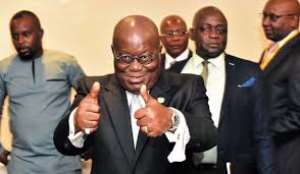 On the 26th of April 2020, the president, Nana Akufo Addo in his 8th address to the nation (measures taken against the spread of the coronavirus) promised to build 88 hospitals across the 16 regions of Ghana. According to him, the project was a strategic measure to boost the health delivery of the country, even as the various, districts are strengthened to handle health related cases wrought by the coronavirus on the country.

Many Ghanaians questioned the authenticity of the promise, with some labelling the announcement as ‘audio project’ among others.

For example, in a publication on dw.com, policy analyst, Ziblim Alhassan is reported to have labelled the promise ‘Unrealistic’. In his view, the president was not in the capacity to have made those promises when a single testing centre had not been set up at the time, a month after the coronavirus was recorded in Ghana.

However, as of July 27, 2021, not a single hospital out of the 88 district hospitals promised had been completed. Reports from other regions suggest that work had not even begun in many parts of the regions. But the president, in his address last year said the hospitals were going to be completed in 1 year.

One year after this promise, the president has once again made another promise in his 26th televised address to the nation on July 26th 2021 to build a national vaccine institute. According to the president, the institute will be mandated to build the human resource base for vaccine discovery, development, and manufacture and also establishment a permanent national secretariat to coordinate vaccine development and manufacture.

While the construction of the 88 hospitals promised more than a year ago, to be competed within a year, is still pending, the recurring question among many right-thinking members of the public is ‘is this yet another promise’?

The coronavirus does not seem to be going away anytime soon. Dr. David Cennimo, an infectious disease expert at Rutgers New Jersey Medical School, has said that the coronavirus will continue to mutate just like influenza. This means that the delta Variant is just one of the mutations to expect. It could also mean the need for annual vaccinations, again, just like the flu. The new variants are already showing how the virus is adapting throughout the globe.

‘And it’s unlikely the coronavirus is going to cease mutating’, said Dr. Stephanie Silvera, an epidemiologist at Montclair State University.

While this may be the case of worry for many developed states (not exclusive of undeveloped countries like Ghana), it implies that there is an urgent need to boost health care delivery in the country. This includes the building and upgrading of hospitals, such as those promised by the president a year ago as well as maintaining existing ones to be ready for the long fight against the virus.

Checks with partner newsrooms across Ghana show that government is yet to make anything good of its promise to upgrade existing hospitals, which are in deplorable states, with some struggling for basic hospital supplies, such as beds. The promised work on two police hospitals have also not started as of 2020.

In the light of the many broken promises, and the continuous promising of new projects, Nana Akufo Addo was nicknamed ‘King Promise’ in 2017. The name does not seem to be going away any time soon as the president continues to lay one promise over another. It appears Ghanaians have become used to the promises and are not expecting much from the ‘colourful’ details of the new promise to build a national vaccine institute charged with the mandate of producing vaccines in Ghana.

Latest Photo Reports
Catch up with all the political quotes from our politicians.
Advertise here
More Editorial
ModernGhana Links
What is the E-Levy?
The pain of a teenage 'Kayayo' at night
The Noise Pandemic Will End If We Enforce Laws
The COVID impunity persists
The Mounted Novelty Is Here
Editorial: Considering the SME lending gap in West Africa
For The Sake Of Road Safety
Our rivers are back
And There Was No Scandal
TOP STORIES

SSNIT Scandal: Court to decide on mode of trial on December ...
44 minutes ago