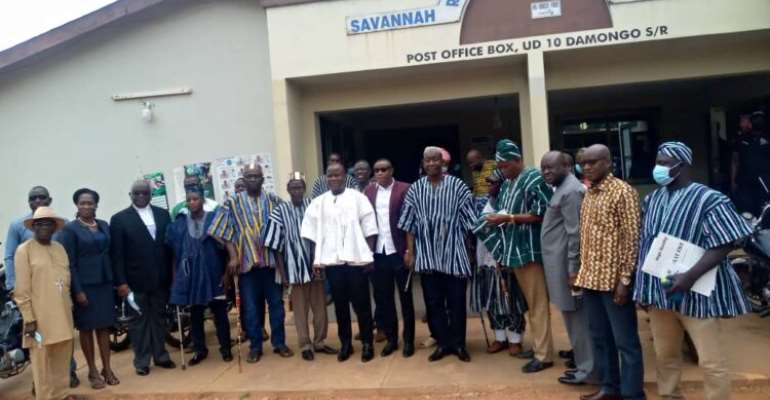 The Minister for Lands and Natural Resources, Lawyer Samuel Abu Jinapor has inaugurated a 14-member Regional Lands Commission with a call to lead education on the new lands act.

This falls in line with article 258 and 260 of the 1992 constitution which mandates the creation of the Lands Commission and its regional offices across the country.

During the induction of the commission members into office, the lawmaker disclosed that land was a very valuable natural resource which when managed properly can propel the needed socio-economic development.

According to him, the Savannah Region is blessed with natural resources, making it the largest of the 16 regions in Ghana in terms of land size. "It is my hope that the Savannah Regional Lands Commission would lead the education on the new lands act in the region to ensure among others that, deeds are registered as mandated by the law".

He disclosed that the Lands Commission was in the process of undertaking a major digitization programme to digitize its records and ensure a prompt and timely registration to prevent fraudulent dealings in land administration as stipulated by the Lands Act of 2020(Act 1036).

The lawmaker charged the Achanso led Commission to bring their expertise and experience on board to make the administration of land better in the region and properly protect and manage public lands needed for critical infrastructure on behalf of government.

He called on traditional authorities and all stakeholders to lend the Commission the needed support to work better, whilst commending the traditional leaders for the bold decision in banning outrightly, all forms of tree harvesting in the region.

The Savannah Regional Minister, Saeed Muhazu Jibreal who chaired the function commended the Lands and Natural Resource Minister for making time to grace the occasion and appealed to the members of the Commission to collaborate with the necessary stakeholders in the discharge of the mandated functions.

On behalf of the members of the Commission, Dr. Sulemana Achanso gave the necessary assurance that they were going to work closely with chiefs and other stakeholders to start in earnest the process of registering land deeds as required by the Lands Act and take a keen interest in the digitization drive of the records of the Commission.

Alhaji Daud Sulemana Mahama, the Executive Secretary of the Lands Commission, said there is a huge task to be handled by the newly inaugurated regional office noting that, the Commission will soon acquire 2,000 acres of land to initiate the satellite city process for Damongo and its environs.

He cautioned that Land Commission was not a place to make money, but rather to work harder to put things in order for the benefit of all in the Savannah Region.