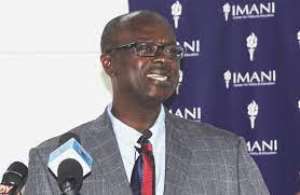 Private legal practitioner and professor of accounting, Prof Kwaku Azar has begun a process to allow Ghanaians who hold dual citizenship to be recognized and given considerations that every Ghanaian is entitled to.

In particular, interest is the part of the constitution that details what qualifies one to serve as a Member of Parliament or holder of public office.

According to Prof. Kwaku Azar, article 94 clause 2 (A) and article 8 clause 2 of the constitution do not reflect the current demands of modern democracy and must be amended.

In his view, Ghanaians who hold dual citizenship do not cease being Ghanaians and must not lose their rights to function and participate fully in the democratic process of the country.

He added that the amendment of the parts of the constitution highlighted does not confer any special privileges unto dual citizens, neither does it call for any special entitlements, favours, appointments, or dispensations.

‘A person shall not be qualified to be a member of Parliament if he owes allegiance to a country other than Ghana; or Furthermore, article 8 (2) of the constitution makes it impossible for any Ghanaian with dual citizen to hold any public office, including becoming an Ambassador, commissioner or working in the police service as Inspector General.

The specific law reads thus; 'Without prejudice to article 94(2)(a) of the Constitution, no citizen of Ghana shall qualify to be appointed as a holder of any office specified in this clause if he holds the citizenship of any other country in addition to his citizenship of Ghana

The amendment of the current provisions of the constitution, which according to Kwaku Azar is not an entrenched provision will allow Ghanaians who hold citizenship of other countries to be able to stand for elections in Ghana, as well as have the opportunity to be appointed to serve in various state capacities which hitherto, is impossible under the current dispensation.

The process to amend the ‘impugned’ statutes follows a slightly different path according to Prof Kwaku Azar, and only requires a simple majority of votes from parliament.

According to the outspoken legal practitioner, the proposed amendment has been gazetted and will move to the first reading in parliament (at least 10 days after the 2nd gazette).

The Speaker of Parliament after the first reading will then send the bill to the council of state for Advice on the way forward. After this, the bill will be returned to parliament for a second and third reading after which there shall be a vote on the amendment. At least, 183 votes are required for the bill to be successfully approved to take effect. After the bill has been passed, the president is expected to assent his signature to complete the process.

The result of this amendment will give dual citizens the opportunity to contribute their quota to the development of Ghana by fully participating in the democratic processes of the country, be able to stand for elections to be elected as Member of Parliament or be appointed to hold any high public office. This will ensure that the country will be able to tap into the rich and diverse experience of Ghanaians who also double as citizens of other countries but are very competent and qualified to serve Mother Ghana.