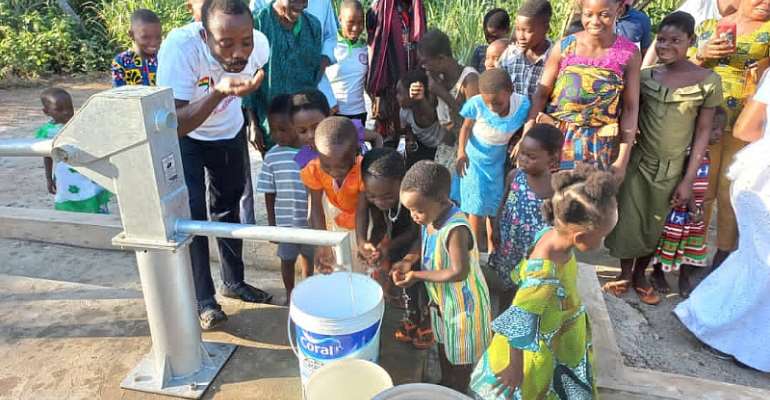 Madamfo Ghana foundation, a Non-Governmental Organization has donated borehole water to the people of Deve in the Ahlifedo electoral area of the Akatsi South municipality in the Volta region.

Madam Happy Dzamesi Afun, the Project Director urged the people of Deve to utilize the facility for their own benefit.

She said the Foundation is poised to do more for the electoral area. "We will do more just to help and transform human lives," she stated.

Mr Eli Wemegah Samuel, the Assemblymember of the area expressed excitement over the project.

He thanked Anja and Sarah and friends who led the Madamfo Ghana Foundation for the great project.

He disclosed to ModernGhana News that people in his electoral area have been suffering many years to get good potable water.

He said the timely intervention by the NGO he lobbied for to construct the project was just a blessing.

Mr Wemega noted challenges such as bad road network, unavailability of electricity in some of the communities, lack of potable drinking water and no health facilities in the area among others are making life unbearable.

"Our problems are just numerous and we are pleading with capable individuals, groups and NGOs to help for the benefit of my people," he added.

Agbotadua Yao Soshie who spoke on behalf of the chiefs and elders during the ceremony thanked the NGOs for their kind gesture.

He also congratulated the Assemblymember of the area Mr Wemegah Elli Samuel for his hard works that brought the project to the area.

According to him, he was excited when the Assemblymember came to him in May this year about plans to construct borehole for the area.

"Today, promises the Assemblymember gave us some months ago has manifested. we thank you a lot," he noted.

Agbotadua Soshie also appealed to the government to help fix their bad roads and abandoned rural electrification projects in the area to enable their children learn at night.

He continued that, the area needs health centres to end the unnecessary loss of lives.