Malnutrition in children to quadruple in southern Madagascar: UN 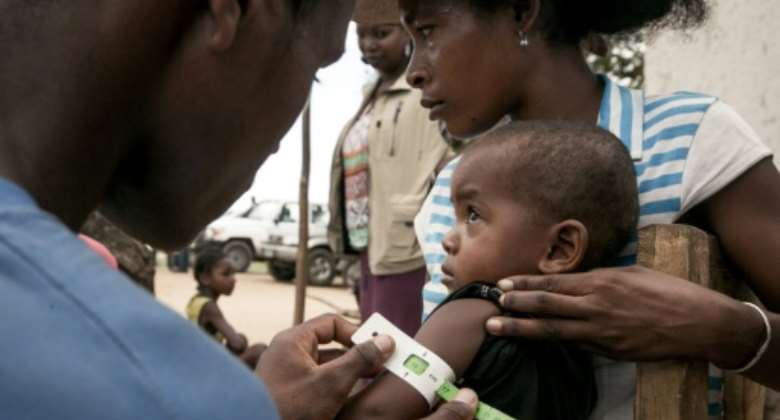 The number of acutely malnourished children is likely to increase fourfold since an October 2020 assessment, WFP and UNICEF said. By RIJASOLO (AFP/File)

Currently, more than 1.14 million people are food insecure in southern Madagascar and the number of people living in "catastrophic" conditions risks doubling to 28,000 by October, the agencies said.

"At least half a million children under the age of five are expected to be acutely malnourished including 110,000 in severe condition," they warned in a statement.

They said the number of acutely malnourished children is likely to increase fourfold since the previous assessment conducted in October 2020.

Five straight years of low rainfall have wiped out harvests and cut off access to food for many in the region, and the situation is expected to worsen as the lean season draws nearer.

"What is currently happening in southern Madagascar is heartbreaking. We cannot turn our backs on these children whose lives are at stake," bemoaned WFP Madagascar's Moumini Ouedraogo calling for "redoubled efforts" to raise the necessary funds.

Acute malnutrition rates are rising in the worst-affected Ambovombe-Androy district, where more than three quarters of the population have been affected by a disastrous cocktail of drought and Covid-19 infections, aggravated by poor health and sanitation facilities and a lack of safe water.

UNICEF Madagascar's Michel Saint-Lot said there is an urgent need to act to prevent the situation from becoming "even more critical".

Most of southern Madagascar's population relies on agriculture, livestock and fishing.

Food production has been dramatically low since 2019.

The scarcity of staple foods on the market is also pushing up prices, the UN agencies said, recalling that they have been working with the government since last year to address the famine.