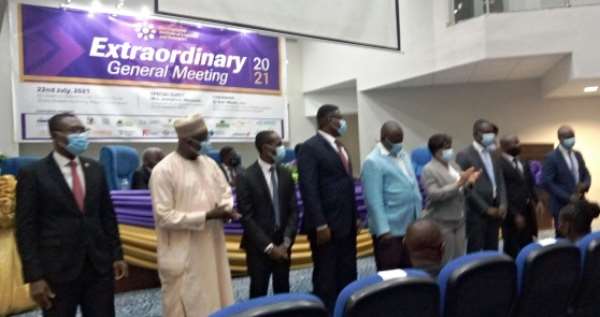 The Chartered Institute of Logistics and Transport (CILT-Ghana) has held its Extraordinary General Meeting with the election of its National Council Executives to lead the Institute for the next four years.

Addressing the Meeting, the Immediate Past President of the Institute Dr. Ebo Hammond expressed gratitude for the support he received from members during his term of office.

According to him, the success he chalked in that capacity was due to the massive support he received from the entire membership of CILT-Ghana.

Speaking in an interview however, Dr. Ebo Hammond indicated that COVID-19 has greatly impacted the transport and logistics sector with the Maritime and Aviation industries suffering a major setback.

According to him, major airlines have grounded whilst maritime trade is affected hence sharp increase in fares.

Dr. Ebo Hammond also averred that the Chartered Institute of Logistics and Transport (CILT) during his term made some policy recommendations to government which will help to carry out excellent road expansion projects throughout the country.

He believes that government will focus on that especially on the dualization of all major highways.

He indicated that key highways including Elubo-Takoradi-Cape Coast-Accra-Aflao and Accra-Kumasi-Tamale-Paga need consideration since they are the key road-spine of the country.

Their development, he said may be done in phases with funding arrangements such as BOOT and other PPP types.

He also insisted that CILT proposed hat road projects, both new or re-modeled, in the cities should have dedicated lanes for emergencies and high occupancy buses to help facilitate emergency medical evacuation and to facilitate BRT.

Meanwhile, he pointed out that all these policy imperatives CILT-Ghana made to government are into the future and are COVID-19 bound.

“Dualization of major roads will help solve lot of capacity problems of the road networks and lessen the burden. Our Road network takes about 80% of transport and freight and so when we expand them, I believe they will be able to contain the volume of demands on them,” he said.

Also, speaking with the Newly Elected President of CILT-Ghana, Mr. Mark Amoamah he pledged to build upon the excellent performance of his predecessors by ensuring that the International vision and mission of the Chartered Institute of Logistics and Transport is attained

“We have the Corporate aim, mission and vision. I will ensure that we build upon education and ensure that membership is taken to higher height,” he said, stressing that his administration will employ all the strategies and goals to be able to achieve that by paying much attention to the Young professionals, develop them into high level of membership through mentoring programs to build their capacity.

Mr. Mark Amoamah promise to pursue the policy imperatives that the Institute under the previous administration resented to government for full implementation.

The Chartered Institute of Logistics & Transport (CILT) is the leading international professional body associated with logistics and transport with over 33,000 members working in over 100 countries across the globe.

Established in 1919 as the Chartered Institute of Transport (CIT) and receiving its Royal Charter in 1926, the Institute has an exciting history behind it, but is always adapting to stay consistent with current logistics and transport issues.

The name CIT was changed to CILT in January 2002 following the international merger between CIT and The Institute of Logistics (IL). The principal objective of the Institute is “To promote and encourage the art and science of logistics and transport”.