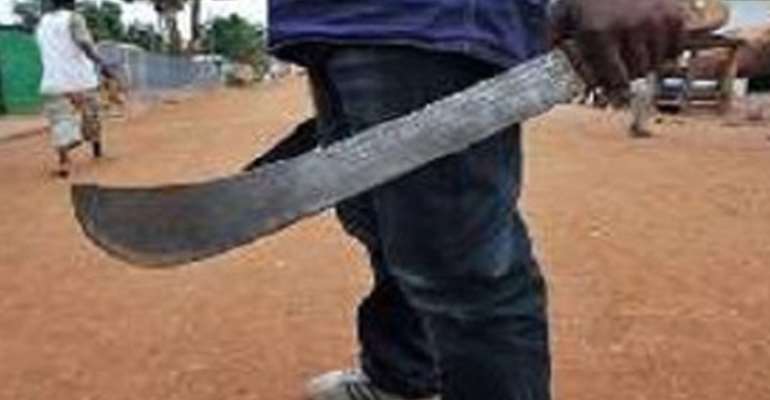 A Circuit Court in Bekwai in the Ashanti Region has remanded into prison custody, a 38-year-old man who allegedly hacked his wife with a sharp machete after pinning her down on their bed during a rage.

Thomas Peprah aka Piero, a farmer, is said to have repeatedly slashed the mother-of-five, Joyce Tei, inside their room at a house at Nkran, a farming community near Jacobu in the Amansie Central District of the Ashanti Region.

He had accused her of alleged infidelity and took the law into his own hands.

Peiro is expected to be back in court on July 29, to answer a provisional charge of causing unlawful harm, contrary to section 69 of Act 29/60.

Prosecutor, Detective Chief Inspector Stephen Ofori said the attack occurred on the dawn of July 17, during which the accused person slashed his wife several times before she was rescued when their son, Emmanuel Peprah, 17, and one of his mates, Kwaku Adu, bravely intervened.

He stated that Emmanuel, in an attempt to subdue his father, had to slash the accused person's occiput and managed to free his mother.

Joyce was rushed to St. Peter's Hospital which subsequently referred her to the Komfo Anokye Teaching Hospital in Kumasi for treatment, the prosecutor said.

According to him, the violence Joyce Tei suffered was so extreme that she had significant injuries to her head, face, neck, arms, hands, shoulders and back.

Police in Jacobu, upon hearing about the incident, proceeded to Nkran and found Thomas Peprah lying in a pool of blood.

He was taken to St. Peter's Hospital where he was treated and discharged on July 18, 2021.

He informed the court presided over by His Worship Mark Diboro that the couple live together at the farming community with their five children.

Chief Inspector Ofori said after the delivery of the last child who is now eight months, the suspect began accusing his wife of flirting with another man.

They both retired to bed on July 15, 2021 but the man woke the victim up around 4:30 am to query her about the alleged infidelity.

The prosecutor disclosed that this degenerated to misunderstanding and the accused became infuriated, pulled a machete under their bed and attacked her.