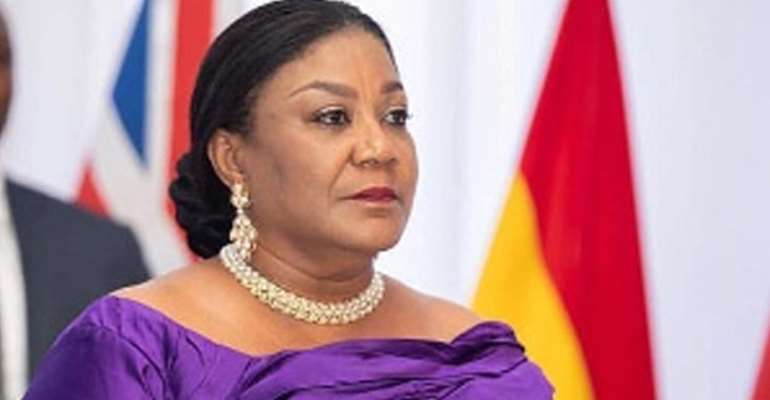 Let her be first, the lady. In short, in life, it should be respectfully ladies first. It was a courtesy lesson we were taught, growing up, which was meant to be to respect, honour and appreciate the specialness of the woman. She is the mother, sister, girlfriend, wife, auntie, grandma and all the important assigned female gender roles, to cherish.

That was all until the creation of a group called congress. Created as mess in mess, they want to mess up the honour of First Lady for their selfish 'search and destroy even when there's nothing unworthy of existence,' approach to the politics of winning elections they know they are losing. So, now, destroying a first lady, making the First Lady their chewing stick, as we locally say, has become part of their game of winning power.

I needed to borrow the gerund of besmirch, to say they are besmirching a harmless, a do no harm, First Lady of poise and benevolence, Rebecca, when she hasn't done anything wrong at all. I know they have been picking on the Second Lady, Samira. Their attitude towards her has been ahoɔyaa nkoaa (plain envy). And so now that they, First and Second ladies, are not just saying but have actually done it, that take your crumbs of allowances, we shall see what a future congress first lady, God forbid that though, would do. We have seen how their type grab anything and everything, state or private, that they sight.

By congress act, there was a time in this motherland when there was only one lady who was first and master as well as mistress of all she surveyed. She was First Lady made of the congress family. For close to twenty years, no congress man dared to question how much she was being paid and whether it was an allowance or salary. Not the new generation in their student leader roles then. So now all congresspeople, congressmen and congresswomen, have sat down for the misogynists among them to throw mud at a gentle, purpose focused First Lady and her Kyidɔmhemaa seconder.

My compatriots have seen through it all to make the whole thing backfire spectacularly to boomerang against a First Lady whose only concern was to make as much money by exploiting her position and state resources. So gladdening the Makola sisterhood has seen through it all. It was refreshing seeing them on television spontaneously condemning the congress mud throwing at two fine ladies.

I have been watching in amazement how congresspeople have been harassing the Second Lady in a house they don't know should be housing honourable people and not dishonourable hecklers.

All dressed up as feminists promoting the cause of the woman, they act like femi-nazis, ready to destroy the woman if it suits their selfish pursuit of political power. Congressmen's female counterparts who have suspended their sisterhood solidarity to descend indecently on the decent.

As for their anti-judge campaign, the last time they vented it in 1982, it led to brutally murdering three of them at once.

They had nothing to say about their sister who dashed an individual, one person alone, GH¢51 million plus of the motherland's hard earned tax money. They also sat unconcerned when their sister protective minister had no protection for vulnerable children with disabilities; and watched unconcerned when the poor children's schools were closed because, under her watch, congress government won't give them any money.

If Shey (Akoto Ampaw) successfully spurned congress luring in their 20 years looting, it is laughable to suggest in 2021 that he is in cahoots with the whole mighty chief judge to take a bribe of $5 million dollars. After living a dignified service to the motherland, it's absurdity to accuse him of that act. It's clear it's from the book of the chairman's recording in which he calls for embarrassing top public officials congresspeople have an axe to grind with. You go to court with anansesɛm and when you are outsmarted in your own game with “My Lord, I close my case too,” you turn round and malign innocent competent professionals.

My compatriots, never forget a chairman's command of kill them, kidnap, make it look like security has never been this bad; scandalise first lady and chief justice, set arson all over and a general secretary's make the country ungovernable. A colleague keeps wondering why anytime these heinous acts occur, some radio or television station would not play the 'chairperson's' voice on tape issuing commands to that effect.

The constitutional arrangement of buy one president (always a male) and get a wife (if you like spouse) for free is outmoded and unacceptable in this day and age. So far, and probably for the foreseeable future, presidents have been, and will be, men and spouses women. Women are persons too.

In all their male chauvinists' attitudes of destroy the ladies, First and Second, I wonder where their women stand. I had always thought in all the dirt and filth of politics, one would still find a women's caucus. I haven't heard a word of that in the 'destroy the first and second lady' rhetoric, actions and ampɛbrɛ tactics. Congresswomen are missing, as in where art them sisterhood and the gender parity struggle in politics. It is congress' 'no sisterhood here,' sororal solidarity gone awol (away on leave). Congresspeople hear evil and see evil where there's none, all so they have an excuse to do evil to both the motherland Republic's First Lady and the Second Lady.