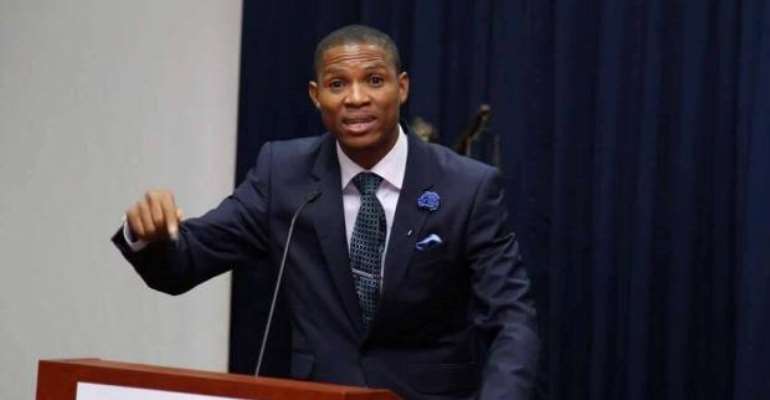 Following the introduction of the Private Member's Bill titled: The Promotion of Proper Human Sexual Rights and Ghanaian Family Values, Bill 2021, from eight colleague Members of Parliament (MPs), there has been varied opinions and misleading reportage about my comments which have been completely taken out of context.

It appears to me that many people have wrongly judged me when they have neither read the bill nor listened fully to the interviews I granted TV3 and Metro TV in Parliament on Friday, 23rd July, 2021 on the subject matter. I have seen and read how many have taken the issues out of context to imply that I am not in support of the bill and that I am even against the Right Hon. Speaker on this Bill.

This piece of article is to bring clarity to my position on this matter and I believe that when the dust eventually settles, reason shall prevail over emotions.

THERE IS NO HUMAN RIGHT IN LQBTQ+ AND I AM NOT AGAINST THE PROMOTION OF PROPER HUMAN SEXUAL RIGHTS AND GHANAIAN FAMILY VALUES, BILL 2021

For the avoidance of doubt, I am not against The Promotion of Proper Human Sexual Rights and Ghanaian Family Values, Bill 2021 and I am not and will never be an advocate for gay rights although I have been a leading Human Rights advocate for over 10years and counting. As President for Youth for Human Rights Africa, I have had several invitations to be a gay rights advocate but turned all of them down. This is because my personal beliefs as a Christian are against that position and the collective aspirations of the people I represent as a Member of Parliament is against this position as well.

I believe in the position that, there is no human rights in homosexuality or lesbianism and all its variance now collectively known as LGBTQ+. I have made this position clear throughout my human rights activism and everyone can cross-check that. Both in my law practice and human rights advocacy, this position has been clear. If in doubt get the full videos from TV3 and Metro TV to properly understand my position. I also have immense previous records and public positions on this matter.

Historically our leaders have all taken position on this matter. However, we have not had any clearer position on the matter until the introduction of this Bill. This is why I believe the Bill is a bold attempt to bring sanity in that space and bring finality to the debate. I am for and would support the bill because in this time in history our society is unanimous and united on the need to proscribe the conduct and activities of LGBTQ+. Societies are dynamic. Our culture, values, and preferences change with time. Laws, particularly penal laws are generally a reflection of what the norms of general acceptance of societies are. There is no doubt that in this day and time, the way to go is to support the Bill. We are not leaders unto ourselves. We represent the values and aspirations of our people and we must do everything to protect that.

I must also clarify that the Bill which is currently at the draft stage and will be laid before the house before being referred to the appropriate Committee for consideration in its current form has quite some issues and concerns which every lawyer must be courageous to point out though I concede, it is a great and bold attempt to bringing sanity and finality to a practice we consider alien to our culture.

It is my position that there are matters of concern in the Bill that needs to be reviewed and reconsidered to make the Bill an improved one which is reflective and consistent with our current views on sanctions which must be more reformative than retributive.

I wish to state that, in human rights advocacy and practice, there is a difference between Human Rights Protection and Human Rights Promotion. I have defended and protected the rights of many in my over 10years of human rights practice and advocacy, but I have not and will not in any way promote the rights of LGBTQ+ because as I have earlier stated I don't believe there is human rights in the said practice. The fact that as a Lawyer or a Human Rights activist, I represent people in court, speak and fight for their rights does not mean a promotion of their acts. We protect people because it is our fundamental duty to do so whiles I stand for the promotion and protection of all the values espoused by the Bill.

I am of the opinion that misdemeanors must go with non-custodial sentences such as community service or fines. I have also advocated in the alternative that we relook at removing the minimum imprisonment terms and only set a maximum term of imprisonments to allow Judges an opportunity to impose perhaps a discretionary number of days or weeks for some of such misdemeanors as well as possibly reduce the penalty units. The Bill does not also provide for mandatory treatment of such persons thrown into prison. This is in spite of our knowledge of the fact that homosexuality is higher in such confined prison facilities than open ones. The time has come where we must as a people ensure that our prisons are reformative and not retributive.

DRAWING ATTENTION TO LIKELY CONSEQUENCES NOT A SUPPORT OF THE PRACTICE

Thirdly, I was by my earlier comments, which have been widely reported in the media, seeking to draw the attention of the public that we must be ready for the international consequences associated with passing such a Bill following the choice we have made as a people (which I support). This is by no means to suggest that I seek to promote a practice I consider alien to our culture. This comment was only to draw our attention to the likely consequences of passing the Bill, some of which include the bruising of our bilateral relationships with some Development Partners, as well as funding in some Spheres or Quarters. However, we as a people have a choice to make, and I will rather be on this path in supporting the Bill at this point in time of our history.

In conclusion, I wish to state that I have got values and principles as an individual, Minister of the Gospel, Lawyer and Legislator, and hence, will not render support for an ungodly practice. However, difference in opinion on the Bill which I generally support, does not make me a Promoter or Advocate of Gay Practice, despite my protection of the right to Life of every human being. I believe the Bill in its current form must be relooked at devoid of emotions to ensure that the outcome that we all seek is one that is balanced and brings finality to the subject.

You voted us to parliament to fearlessly debate and express our views on matters so the eventual position will help us all as a people. Let us proceed cautiously when we wrongly judge people just for political experiences. We cannot rule Ghana with emotions. Leadership is by a balanced and cautious application of reasoning to the situation at hand to arrive at an outcome that resonates with the aspirations of the people.

I am committed to fearless honesty and will continue to do my best for the people of Madina and Ghanaians as a whole. I believe when the dust settles, reason shall prevail over emotions.

Hottest Photo Reports
Catch up with all the political quotes from our politicians.
Advertise here
More Article
ModernGhana Links
COVID-19 pandemic receives less public sensitization attention in a Ghanaian print media — IBNA research
A grass native to Africa could transform the continent's dairy yields. Here's how
We can't banish COVID-19. But we can end the pandemic with vaccinations
My findings about the sanitation conditions in Nigeria's Ile-Ife point to a bad situation
Informal workers in Senegal, Mali and Burkina Faso have been hit harder by COVID-19
Now is the time to sprint if we want to end hunger, achieve other SDGs
Effective community policing in Nigerian town could be a model for other places
Let’s Dream of an African Renaissance
Ensure Maximum Transparency In The Confirmation Of Metropolitan, Municipal, District Chief Executive Nominees
TOP STORIES

Takoradi 'azaaa' woman still in custody as she fails to meet...
9 minutes ago