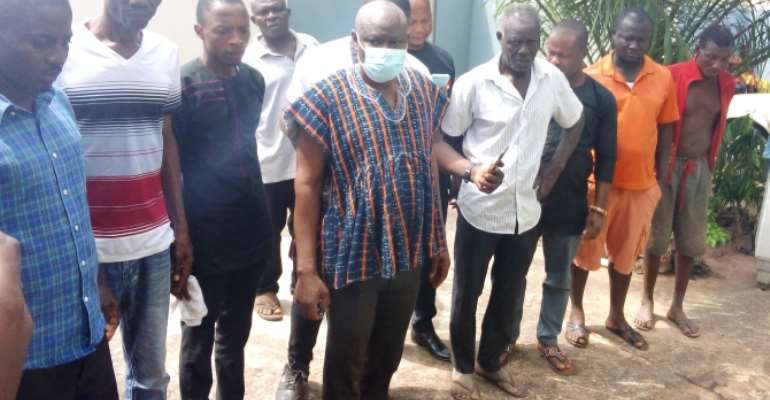 Mr Leo Nelson Adzidoga, the Municipal Chief Executive (MCE) for Akatsi South Municipality has sympathised with the families of the Pastor and wife who were allegedly murdered at Ayitikope.

Mr Augustine Gbedema and his wife Madam comfort Gbedema, co-founders and the leaders of Harmony with Jesus Christ Ministry International Church in Ayitikope in the Akatsi South Municipality have allegedly been killed by unknown assailants.

The incident happened on Saturday, July 24.

During his visit, the MCE expressed worry and disappointment over the murder of the couple.

According to him, he has ordered the Akatsi South Police Commander, Superintendent Joseph Atsu Dzineku to provide him with a report on the situation on Monday, July 26 for further action to be taken.

He assured the families of the deceased and the entire Ayitikope township of maximum security protection in the area.

"Do not accuse anyone of murdering the couple,but have full confidence in the police to come out of their investigations," he added.

Mr George Gbedema, a family member to the deceased Pastor Augustine Gbedema who doubled as the church elder of Harmony with Jesus Ministry international urged the MCE to speed up with investigation.

"Our village is now becoming centre of crimal activities which we can't understand," he stated.

He urged the MCE to as a matter of urgency beef up security in the area.

Mr George Gbedema, one of the elders of the church told ModernGhana News that, after church services on Sunday, July 17, 2021, the couples were not seen the whole of the week.

He said they were absent for the Tuesday and Friday night services which was very unusual.

According to him, some members of the church decided to visit the couples in their house on Saturday, July 24 in the morning only to find their bodies decomposed in their room.

Checks reveal some machete wounds on the neck of the husband and the wife lying half naked.

The couples live alone in a house which is about few metres away from the main town.

The case has since been reported to Akatsi South Police Command for investigation.

The bodies of the deceased have been deposited at Akatsi Dagbi Mortuary pending autopsy.

Information gathered by ModernGhana News reveals that Mr Gbedema was a former member Ghana Cocoa Board who retired about ten years ago.

Mr Peter Defor, a member of the church stated that there has not been any case of the pastor having a grudge with anyone since the establishment of the church about ten years ago.

"I can't tell for now that the alleged killers have made away with any of their belonging," Mr Defor disclosed.

He appeals to the Akatsi Police to speed up with investigations to bring the perpetrators to book.

Mr Mawulolo Atsah, a journalist working with Ghana Broadcasting Cooperation (GBC) and also a brother to the deceased Madam Comfort Gbedemah, expressed worry about the incident.

"Am shocked by the incident, how could my sister and husband be killed like this?" he wept.

Mr Jerry Etsey Agbo, the Assemblymember for Gefia-Ayitikope Electoral Area told ModernGhana News that security is poor in the area.

According to him, a robbery incident occurred in the same village where the owner of Makafui Lottery was shot in the leg by the armed robbers two months ago. "We are still counting on the police to come out with their investigations", he stated.

Mr Agbo added that people in and around Ayitikope are living in fear due to the security lapses in the area.