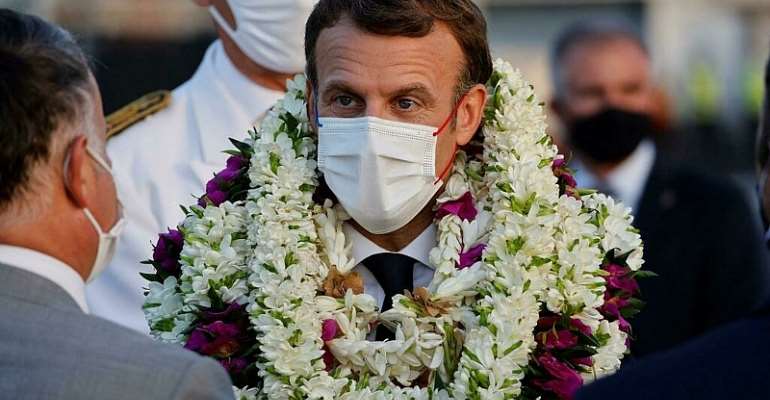 French President Emmanuel Macron was greeted with flower garlands and Tahitian dancers on the tarmac as he touched down Saturday night for his first official trip to French Polynesia.

While in the South Pacific territory, he plans to discuss its strategic role, the legacy of nuclear tests and the existential risk of rising seas posed by global warming.

Residents in the sprawling archipelago of more than 100 islands located midway between Mexico and Australia are hoping Macron confirms compensation for radiation victims following decades of nuclear testing as France pursued atomic weapons.

The tests remain a source of deep resentment, seen as evidence of racist colonial attitudes that disregarded the lives of islanders.

"During this visit, the president intends to establish a strong and transparent dialogue by encouraging several concrete steps, on the history with the opening of state archives as well as individual compensation," said a French presidential official, who asked not to be named.

Cover-up
French officials denied any cover-up of radiation exposure at a meeting earlier this month with delegates from the semi-autonomous territory led by President Edouard Fritch.

The meeting came after the investigative website Disclose reported in its 2,000 page "Moruroa Files" in March that the impact from the fallout was far more extensive than authorities had acknowledged, citing declassified French military documents on the nearly 200 tests.

Only 63 Polynesian civilians have been compensated for radiation exposure since the tests ended in 1996, Disclose said.

The weekend before Macron's arrivel, AFP reported that several thousand people demonstrated in Tahiti's capital Papeete to demand that France recognize its "mistake" in the nuclear tests carried out in French Polynesia for thirty years. The rally was called by pro-independence leader Oscare Temaru. Some 2,000 people took part in the march, according to the police - the triple, according to the organisers.

Macron, who arrived in the South Pacific after a visit to the Olympic Games in Tokyo, will also lay out his strategic vision for the strategically valuable territory, where China has made no secret of its push for military and commercial dominance.

One of three French territories in the Pacific, French Polynesia has a population of around 280,000 over a huge swath of island groups spanning an area comparable in size to Western Europe.

Tahiti is the most densely populated of the islands.

Macron "will present the Indo-Pacific strategy and the position France intends to maintain in this increasingly polarised zone", the Elysee official said.

Macron also plans to address risks for the islands from rising sea levels as well as cyclones that some scientists warn could become more dangerous due to climate change.

But his first visit will be with hospital workers racing to combat rising Covid-19 cases with vaccines.

Many Polynesians remain wary of the jabs, with just 29 percent of adults vaccinated, compared with almost 49 percent across France nationwide.