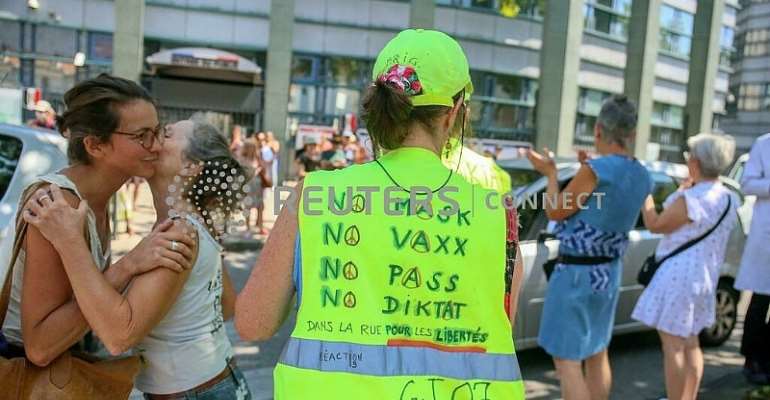 Following a new day of mobilisation by its opponents, the law on anti-Covid health pass could be definitively adopted on Sunday evening, if deputies and senators reach an agreement, but the way is narrow and a prolongation of the debates cannot be excluded.

In the meantime, the governmrny continues to push for vaccination, in the hope of passing the 40 million mark for first-time vaccinations "by Monday, 26th of July, at the latest", a month ahead of the initial target.

From Polynesia, where he is travelling, Emmanuel Macron said he was sending "a very strong message to call on everyone to be vaccinated" to protect themselves and others.

The head of state also called for the parliamentary debate on the health pass "to be carried out in a calm and effective manner".

Senate vote
The Senate, dominated by the right-wing opposition Les Républicains, voted on Saturday night, by 199 votes to 123, for the bill which provides for compulsory vaccinations for carers and the controversial extension of the health pass. However, there were important modifications compared to the text approved by the National Assemble, and which are not to the taste of the government.

It remains to be seen whether MPs and senators will find a compromise in the joint committee, which sits from 3pm this afternoon. This is the scenario favoured by the government as it would allow the bill to be definitively adopted in the evening, for application of the extended pass at the beginning of August.

A disagreement would derail this very tight schedule, forcing a new parliamentary shuttle. The head of the les Républicains  senators Bruno Retailleau brandished the threat of a disagreement on Saturday, "if the deputies want to scrap the work of the Senate".

But time is running out in the face of an unprecedented surge in infections linked to the spread of the highly contagious Delta variant of Covid-19. Once adopted, the text will still have to pass the filter of the Constitutional Council before being promulgated.

This is an additional step, which Prime Minister Jean Castex himself has chosen to take in order to avoid accusations of infringement of civil liberties.

More than 160,000 demonstrators
After a first national mobilisation on 17th of July, dozens of demonstrations took place again on Saturday.

"More than 160,000 people, according to the interior ministry, marched throughout the country, from 500 on the island of Saint-Martin in the West Indies to 11,000 in Paris.

One of the Parisian processions, made up mainly of Yellow Vests was marred by sporadic incidents. On the call of the president of the Patriots Florian Philippot, several thousand people also gathered at the Trocadero.

Health Minister Olivier Véran told the daily French newspaper Le Parisien: “We would have done well without it if the context was different," said . And "we will put an end to it the minute we can".

The challenge for the executive is to try to keep pace with a fourth epidemic wave, which scientists and the minister fear will be "strong with a hospital impact that could be very severe in mid to late August".

Vaccination obligation
In addition to the vaccination obligation for carers, firemen or professionals working with the elderly, the bill provides for an extension of the health pass (complete vaccination course, recent negative test or certificate of recovery) at the beginning of August in cafés-restaurants, fairs and exhibitions, planes, trains and long-distance buses, and medical establishments.

The Calvados prefecture has announced a "voluntary experiment" from Sunday in the bars and restaurants of Deauville and Trouville, in response to a sharp increase in cases.

The health pass is already in force in places of leisure and culture (cinemas, museums...) gathering more than 50 people, except for the 12-17 years old, exempted during the holidays. The government's objective is clearly to encourage vaccination.

The Senate majority has revised the system to make it "clearer" and "more respectful of human rights and freedoms". In particular, it made the extension of the pass conditional on the re-establishment of the state of health emergency, until 31 October, and provided for the exemption of shopping centres.

Some amendments adopted in the Senate divided the right, such as the exemption of terraces or minors from the pass, measures that could be reviewed during the subsequent discussions.

The bill also provides for compulsory isolation for the sick, a provision softened by the senators.