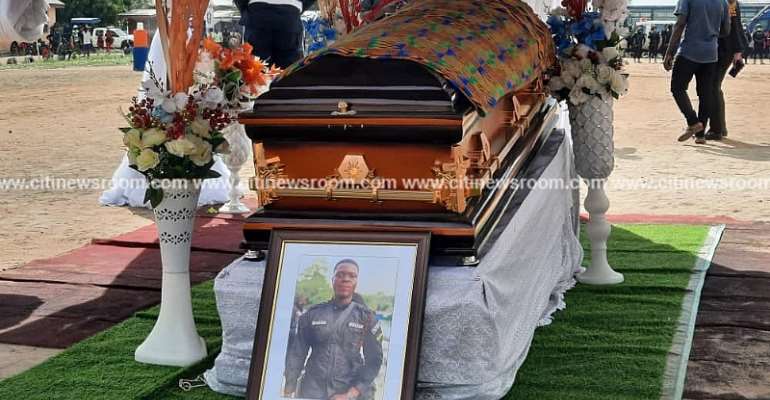 The final funeral rights of Constable Emmanuel Osei, who was shot death by armed robbers at James Town in Accra, was observed on Saturday, July 24.

The funeral service was held at the Gomoa Nyanyano Kakraba school Park in the Central Region.

Family, friends, and loved ones gathered at the funeral grounds to pay the late Constable Emmanuel Osei their last respects.

Interior Minister, Ambrose Dery and members of the Ghana Police Service led by the Director-General of Welfare, Maame Yaa Tiwaa Addo -Danquah were also present to mourn with the bereaved family.

Some friends of the late Constable told Citi News they will forever miss him.

“Today is a very sad day for us. Never did we imagine a day like this. A huge vacuum has been created in our hearts,” one of the late Constable’s friends bemoaned.

“This is heartbreaking. We will forever miss him. Emma, God be with you till we meet again,” another said.

Meanwhile, the Ghana Police Service has promoted the late Constable to the post of a Lance Corporal.

The Police Service believes the accolade is well-deserved, since Emmanuel Osei died in the line of duty.

Speaking at the funeral ceremony, Interior Minister, Ambrose Dery assured that the perpetrators of the crime will not go scot-free.

He also indicated the government’s commitment to enhance the capacity of police officers across the county.

“We will also ensure that banks provide the needed protection for police officers who follow bullion vans,” he added.

Emmanuel Osei was killed together with a female trader by armed robbers who shot them during a bullion van robbery at Jamestown, a suburb of Accra, in June 2021.

The unidentified armed men who were on motorbikes crossed the bullion van and started shooting sporadically.

In the process, two persons were shot dead instantly – the police officer on escort duty, and a trader who was affected during the shooting.

The bullion van driver sustained injuries and was sent to the Korle Bu hospital for treatment. Two tellers who were in the bullion van escaped unhurt.

The weapon of the policeman was also taken away, together with an unspecified amount of money.

Meanwhile, a number of suspects have been arrested and are currently being screened by the police.