Ghanaians Must Stop Viewing The Country As The Property Of NDC Or The NPP, We Need Development 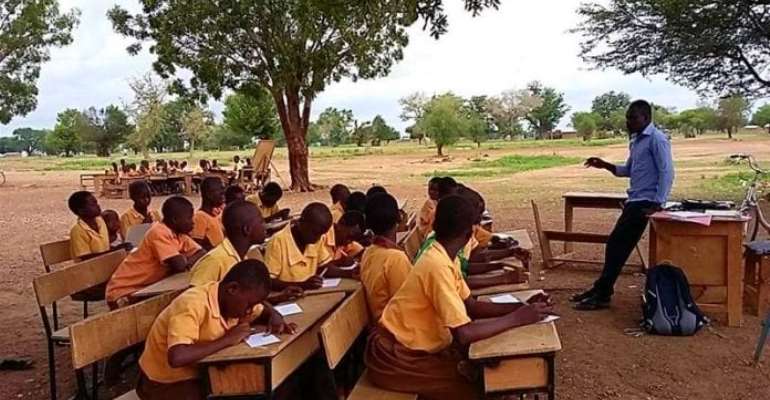 Pupils studying under a tree. The developments in Ghana's educational and health sectors should be our priorities. Photo credit: Ghana media

It doesn’t matter if you are a political analyst or not, once you are politically conscious and cares about Ghana, you will notice that the serious discussions in our country are always based on who to rule and what political will win but never on developments and how to create jobs for the youth.

Despite all the mineral resources Ghana has, the country remains one of the least developed, decades after independence because the majority waste their precious time working on who has to become the president of Ghana, instead of developmental plans for the country.

We must discourage such things in Ghana because it is not going to take us anywhere.

To solve the youth unemployment crisis, the country must experience an economic boom, which is capable to create new jobs all the time and everywhere but the fact that corruption is very severe, Ghana’s economy faces chronic fluctuations, which affects the national currency to lose its value.

There is always a solution to any crisis. In regards to unemployment in Ghana; the government has two choices to make it possible.

The first solution is, the Ghanaian government has to build new industries in the mining, fishing, and agricultural sectors. This could employ additional thousands of people in the country.

The second solution is the expansion of already built factories, industries, and companies in the country. The latter which is the easiest can employ thousands of people to reduce the unemployment crisis.

Even though each government during political campaign addresses the issues of youth unemployment, once they come to power, they never do what they promised.

If the government will be serious to do what is suggested above, the unemployment crisis will be totally reduced in the country and Ghana will experience a flexible economy.

It is the biggest embarrassment to the Ghanaian government, taking into consideration countries like Belgium and Switzerland, that are not cocoa-producing countries, yet earns billions of Euros annually from chocolate production, while a country like Ghana that has cocoa can’t enhance its own industry to provide jobs for the suffering masses.

How can one explain this? The resources are available but the people are suffering. Is this stupidity, corruption, or the lack of common sense? Please, choose one for me.

After President Nana Akufo Addo, any Ghanaian who becomes the next president must embark on projects, such as food processing, soap manufacturing, palm oil production, margarine, and butter production because these are the industries that not only enhance an economy but also solve the unemployment crisis.

If the next president is not prepared to do that, then please, don’t think of even becoming a president or ask any Ghanaian to vote for you.

We need leaders that will make history through developments, not corruption. This is what Ghana has been decades after independence. Enough is enough.

Job creation is a system key that is not easy to use, in other words, it is a very difficult issue but if no government doesn’t take it as a challenge because it’s a difficult task, that means that particular government doesn’t care about the people. This is exactly what exists in Ghanaian politics.

Europe and America have embraced that challenge and succeeded to create jobs and maintain a flexible economy without the resources that Africa has, therefore, African politicians must learn from the developed world to improve the lives of the common people.