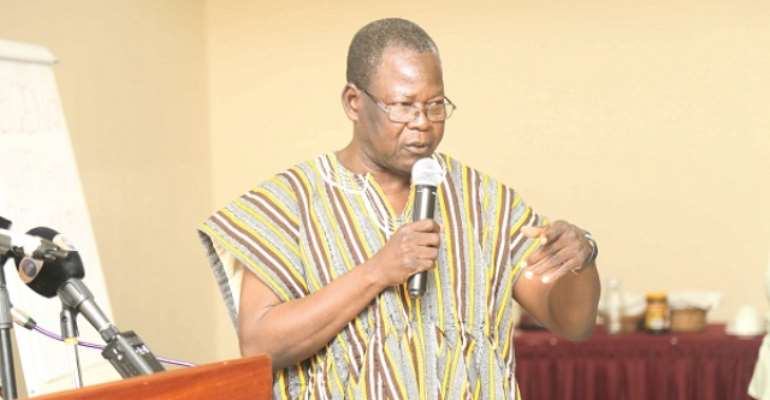 A former executive director of the Ghana Integrity Initiative, Vitus Azeem, is urging special prosecutor nominee, Kissi Agyebeng, to be cautious in his dealings if confirmed for the position.

He said Mr. Agyebeng will most likely face challenges similar to what his predecessor Martin Amidu faced, and so must brace himself to overcome them if he is to succeed in the office.

According to him, while Mr. Agyebeng's responses at his vetting on Thursday, July 22, 2021 were impressive, his major test will come when he officially begins work and is greeted with the different challenges that the office comes with.

“I think that he has started by raising the hopes and expectations of Ghanaians, especially on issues of being his own man and so on…[but] as a special prosecutor, you are not going to work alone, and you are going to depend on the government of the day [for resources]…. The points that he made are very good, very laudable pledges, but whether he will be able to go by them, whether he will be able to resist the pressures that come from all corners, that is my concern,” Vitus Azeem said.

The anti-corruption crusader said he envisages that Mr. Agyebeng, if confirmed as the new special prosecutor, may have challenges getting adequate resources and also getting pressures from various quarters.

“[The challenges] may not be different. They [government] may not give you the necessary money, they may not give you the go-ahead to recruit the number and quality of people you want. Then institutions that you may have to cooperate with may not be giving you the necessary information you need to do your work. The pledges [he made] are good, but he has to be cautious that he is not going to work alone,” Mr. Azeem said.

“We should not compare the two [Special Prosecutors], but there are certain things that have affected Martin Amidu that will also affect him. In terms of party pressures, family pressures, resources,” he added.

Meanwhile, Parliament’s Appointments Committee has unanimously decided to approve Mr. Agyebeng’s nomination . The committee’s report will be presented to the plenary, where a final decision will be taken whether Mr. Agyebeng should be approved or rejected. 'I can't stop corruption

On fighting corruption , Mr. Agyebeng said he will rather focus on making it difficult to engage in the canker than placing emphasis on stopping it.

Attorney-General and Minister for Justice, Godfred Yeboah Dame, nominated Mr. Agyebeng, a law lecturer and private legal practitioner, as a replacement for Martin Amidu, who resigned from the position in November 2020 under very controversial circumstances.

Kissi Agyebeng was called to the Ghana Bar in October 2003 and holds a Bachelor of Laws (LLB) degree from the University of Ghana, as well as, Master of Laws (LLM) degrees from Schulich School of Law, Dalhousie University, Canada, and Cornell Law School, USA.

He has, since 2006, been teaching Criminal Law at the University of Ghana, whilst engaging in private law practice.

Apart from initiating investigations on its own, Act 959 gives the Office of the Special Prosecutor the power to receive and investigate complaints of alleged corruption from the public or investigate suspected corruption or corruption-related offenses upon referral from public bodies such as the Attorney General's Department, the Commission on Human Rights and Administrative Justice (CHRAJ) and the Economic and Organised Crime Office (EOCO).