On Chief Justice Anin-Yeboah: Simply too Facile to Be True 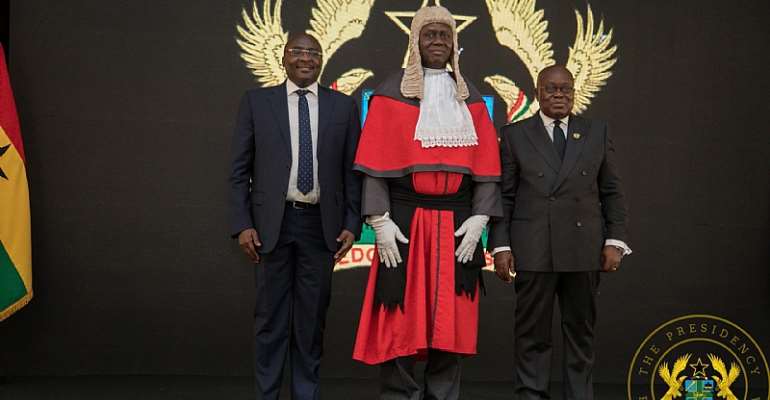 I had wanted to caption this article or, more professionally speaking, column as “The Constantly Perennial $ 5 Million Question.” But I decided to settle on the present one because it fundamentally did not make sense to me that knowing all that Ghanaians already know about the National Democratic Congress-engineered perennial and dastardly orchestrated attempts to ruin the hard-won image and reputation of the most distinguished and prominent members of the judiciary and, thus the judicial establishment at large, since that apocalyptic night of Wednesday, June 30, 1982, that any jurist, least of all the Chief Justice of the Supreme Court of Ghana (SCOG), would stoop so cheaply and so low as to so foolishly and scandalously and, perhaps, even masochistically, allow his/her entire life’s achievement to literally go down the tubes, as it were, or the drain, in globally common parlance.

Now, have we all so soon forgotten the dastardly attempts orchestrated by the Mills-Mahama Cabal to run extant Chief Justice Georgina Theodora Wood off the Supreme Bench of our judicial system? The Montie Trio Saga, in which then-President John “Akonfem-Kanazoe” Dramani Mahama literally rode roughshod over the coequal significance of Ghana’s judiciary as one of the three branches of our democratic system of gubernatorial checks-and-balances? And in the case of a respectable high-end practitioner of the legal profession and trade like Mr. Akoto Ampaw, my not-too-distant relative of the Akyem-Kukurantumi and Asiakwa Clan, literally down to the dogs (See “US $ 5 Million Bribery Allegation: Akoto Ampaw Breaks Silence” Ghanaweb.com 7/19/21).

Interestingly, on Monday, July 19, 2021, when the afore-referenced news story was published by Ghanaweb.com, the globally renowned media portal that, once upon a time, regularly published the columns of yours truly, literally, with lightning-speed alacrity… finally my PERSCO – high school – bombast is rhythmically and mellifluously coming back to me, once again, with a vengeance, was when I had been scheduled for service on a Grand Jury Panel at the Bronx County State Supreme Court, right here in the recently liberated briefly Neo-Nazi-Cannibalized United States of America. Well, that is about the greatest extent of my civic responsibility and practical involvement with the law and the judicial system hereabouts, that is, in the part of our world or the globe where I long ago decided to make or rig up my permanent abode or residency and residence as well.

Anyway, what also fascinated me in no mean measure about this case, that is, the alleged solicitation of a $ 5 Million Payola by Chief Justice Kwasi Anin-Yeboah, is the fact that this language of bribery and corruption has almost exclusively been the mantra of the leadership of the Jerry John Rawlings-founded Ghana’s main opposition political party, to wit, the National Democratic Congress. But it has also on the rarest occasions bounced across the political and ideological aisles. It fascinated me because in 1998, and Ghanaians learned about this almost 20 years later, after innumerable counts of vehement and self-righteous pontifical denials by the principal recipient…. It was after the then-President Jerry John Rawlings had been offered $ 5 Million in liquid cash and crispy currency notes that the recently deceased Founding-Father of the National Democratic Congress flew to the United Nations’ Headquarters, right here in New York City, and breathlessly told the world and all who cared to listen among the denizens of the global community, that the extant Maximum Dictator of the Federal Republic of Nigeria, Gen. Sani Abacha, who, incidentally, would die that same year, was the best political magic that ever happened to Continental Africa’s most populous country and, one reasonably presumes, the Primeval Continent’s single largest economy. These days, of course, “largeness” and “greatness” appear to have literally become synonymous, by the way.

As well, in the equally globally infamous Nyantakyi Case, and almost all the principal players or protagonists whose names appear in this column sport the first Akan Day-Name of “Kwasi” or the latter’s “Abongo-Frafra” variation of “Akwasi,” a variation largely used by relatively recent immigrant arrivals to the Great Asante Kingdom, formerly known as the Great Asante Federation or Confederation. This, too, may not be altogether farfetched or even coincidental. Yes, in the globally infamous Kwasi Nyantakyi Case or Saga, involving the hitherto overrated and almost religiously celebrated and longest-serving President of the Ghana Football Association (GFA), so masterfully exposed by Mr. Anas Aremeyaw Anas and his Tiger-Eye Private Investigators’ Team, our protagonist was graphically shown on digitized videotape smugly claiming that all it took to get a newly elected President Addo Dankwa Akufo-Addo to do the bidding of some Nyantakyi-contracted Arab business moguls, was to plunk down $ 5 Million Payola in fresh and crispy currency notes.

And then, of course, in the European Airbus Payola Racket involving a then Vice-President John Dramani Mahama, it was a forensically established and incontrovertible € 5 Million (5 Million Euros) that was given, that is, us readers and listeners, as the sum total of what it took a substantive President John Dramani Mahama to literally sink the wantonly exploited and criminally overburdened Ghanaian taxpayer into hundreds of millions of Euros in debt deliberately and unconscionably racked up through an aircraft-purchasing contractual scam. Of course, in the Nyantakyi allegation, we all now know that it was a patently bogus attempt to character assassinate the legendary “Little Man from Kyebi.” The Afro-Magical Leprechaun, if the Dear Reader would allow. It is also very certain that some prominent insiders of Nana Akufo-Addo’s own party, the New Patriotic Party (NPP), were smack in the details of this shameless reputation-ruining scam and scheme.

At any rate, what makes the Anin-Yeboah Character-Assassination Ploy especially suspect is the fact that the bribery allegation is not being made by the local chieftain from whose wallet the payola sum of $ 5 Million was expected to have been forked up. Rather, the aforesaid allegation, we are reliably informed, comes from an evidently also-run lawyer by the name of Mr. Akwasi Afrifa, who allegedly told his client, one Nana Ogyeedom Obranu Kwesi Atta, VI, that “justice” could be delivered on the cool, as it were, if the sweaty palms of Chief Justice Kwasi Anin-Yeboah could be greased with the morally and professionally outrageous sum of the Magic Number of $ 5 Million. One just have to cursorily look at the breakdown or the installment of payments plunked down by Nana Ogyeedom Obranu Kwesi Atta, VI, to solidly confirm and/or arrive at the inescapably damning conclusion that Lawyer Akwasi Afrifa’s malicious claim of bribery against Chief Justice Anin-Yeboah is made up of a whole cloth or yarn of inexcusably criminal mendacity. This Akwasi Afrifa guy clearly deserves to be sentenced to life imprisonment without parole.

I mean, you don’t simply start paying up a $ 5 Million payola demand with a relatively diddly sum of $ 100,000 (One-Hundred-Thousand Dollars). Nigeria’s Mr. Dangote could readily tell you this. It is simply too cheap and professionally insulting, to say the least. Your Highest Honor, I rest my case.