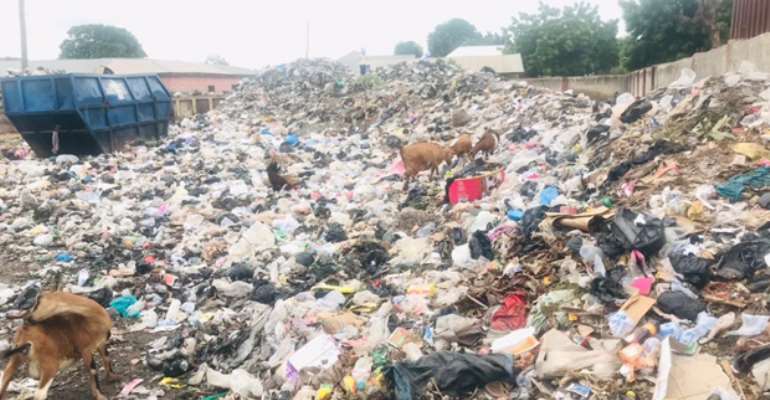 Cholera outbreak is looming at Kalpohini in the Sagnarigu Municipality of the Northern Region.

Some parts of Kalpohini has been engulfed with filth scattered around the area risking an outbreak of Cholera should the rains intensify.

A visit to Kalpohini, Taha and other parts of the Tamale North Constituency revealed that the area is faced with sanitation challenges as massive waste littered close to drainage systems has prevented the free flow of water which could cause flooding when it rains heavily.

It was also observed that the constituency had fewer waste bins and containers placed at vantage points for residents to conveniently dispose of waste.

DGN Online noticed that residents are heavily dependent on public toilets which are in a very deplorable state forcing some residents to opt for open defecation.

When DGN Online visited one of the most patronized public toilets at Kalpohini chief palace area, the smell and heaps of waste around it was unbearable.

A resident, Madam Saana Haruna, said for close to a year, the public toilet at Kalpohini has not seen any renovation or evacuation of waste from the facility.

She expressed worry about the continuous increase of the heaps of waste at the toilet vicinity noting that it could cause an outbreak of disease if not cleared.

“ In the night we find it difficult to sleep in our own house because of mosquitoes and the bad smell due to the deplorable nature of the public toilet and the heaps of waste dumped here.”

According to her, they cook in the open very close to the public toilet adding that they do not have any other option even though they are aware they could be affected.

She appealed to the Sagnarigu assembly and the Member of Parliament for the Tamale North constituency, Alhassan Suhuyini to come to their aid in clearing the filth and providing them with waste containers to avert any outbreak of cholera and other diseases.

Assembly Member for Kalpohini Electoral Area, Musah Nabila told DGN Online that the Northern Regional Minister, Shani Alhassan Shaibu instructed the Sagnarigu municipal assembly to ensure that the waste at the Kalpohini Chief’s palace is cleared but any time they follow up the assembly says they do not have enough funds to evacuate the waste.

“ We followed the assembly and they are still telling us that they haven't gotten funds that can evacuate the waste .”

He attributed the increment of waste in the area due to the failure of the Sagnarigu assembly to pay for the clearing of the waste containers.

“ There are 32 waste containers but the assembly doesn't pay for all and so zoomlion also decided not to clear the unpaid of the containers and so you will go to most of the toilets and see the conditioners full but nothing is done about it .”

The Sagnarigu Municipal Environmental Health Officer, Mr Alhaasan Ibrahim told DGN Online that the assembly made efforts to evacuate the waste around Kalpohini and its environs.

According to him, the assembly had fueled three trucks and hired a skip loader of an amount of Gh 1,700 to evacuate waste in the Tamale North constituency but was met with challenges when all the trucks broke down before the work could commence.

He assured that the assembly is committed to ensuring that the heaps of waste around Kalpohini and its environs are all cleared for the safety of residents but was quick to say that the assembly currently is faced with financial challenges.

Mr Ibrahim however blamed residents for the littering of the environment adding that they dump their waste in the gutters when it rains which eventually prevent water from flowing freely through the gutters and drainage.

“We introduced pay as you dump policy but because of the money issue residents rather carry their waste and dump it into the drainage and sometimes they wait in the night they dump it outside in the open which has health complications.”

He encouraged residents to desist from engaging in open defecation and ensure that they build household latrines for their health safety.

He declared that every last Saturday of every month shall be a Northern Regional Sanitation Day.

The minister entreated all Metropolitan, Municipal and District Assemblies (MMDAs) in collaboration with Zoomlion Ghana and all parties to carry out community mobilizations to embark on clean-up exercises in all major communities and districts across the region.

However, some Metropolitan, Municipal and District Chief Executives(MMDCEs) have failed to coordinate the cleanup exercise as instructed by the regional minister.

The Sustainable Development Goal 6 which Ghana is signed onto calls for clean water and sanitation for all. It is expected that by 2030, achieve access to adequate and equitable sanitation and hygiene for all and end open defecation, paying special attention to the needs of women and girls and those in vulnerable situations.