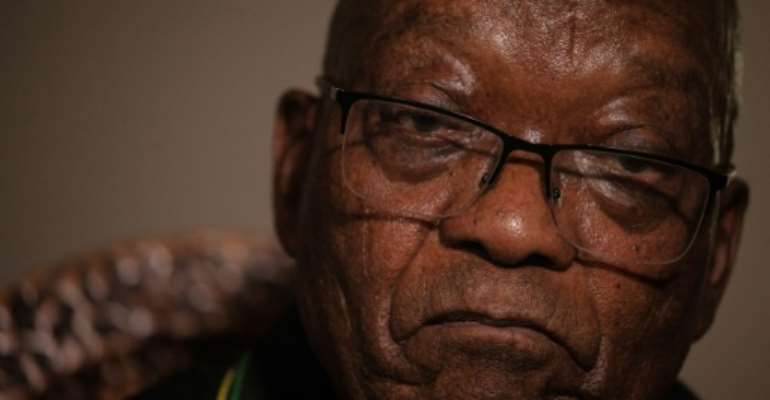 Zuma retains a hard-core following within South Africa's ruling ANC, even though his presidency was tainted by corruption scandals. By Emmanuel Croset (AFP/File)

Zuma, 79, was sentenced to 15 months in prison for contempt of court last month after snubbing graft investigators probing his presidency.

He turned himself in on July 8 to start serving his sentence in the southeastern town of Estcourt, and his brother Michael, 77, died several days later.

His incarceration sparked riots and looting that escalated into the worst violence since the end of apartheid, killing at least 276 people, according to the official tallies.

Zuma was discreetly driven early Thursday to his rural home in Nkandla, 175 kilometres (110 miles) from Estcourt, where the funeral was to be held, a government official who did not wish to be named told AFP.

Soldiers manned the road leading up to a cluster of thatched-roof houses where Zuma's extensive family resides, surrounded by rolling hills.

Zuma's brother died on July 11 after a long illness, according to local media.

The former president was granted a 24-hour "compassionate leave" for the funeral as a "short-term, low-risk" prisoner, the correctional services department said in a statement.

It added that inmates were not required to wear "offender uniform" outside correctional facilities, implying Zuma would not be donning orange prisoner dungarees for the ceremony.

The media were denied access to the ceremonies to allow the family to mourn in privacy, but a picture published by a local newspaper showed Zuma arriving in a navy-blue jacket and a white Panama fedora hat.

Inmates in South Africa are usually allowed to attend relatives' funerals -- a right denied to the country's first black president Nelson Mandela when he was in jail for fighting the apartheid regime.

Zuma himself spent a decade in prison for fighting white-minority rule, after which he fled into exile and became a feared head of intelligence.

Charismatic and jovial, he succeeded Thabo Mbeki as president in 2009.

After nine years in office, Zuma was ousted by the ruling African National Congress (ANC) over a string of graft scandals that arose during his presidency.

Yet he retains a fervent support base both within the ANC and among the general public.

Crowds of supporters had gathered in Nkandla after South Africa's top court sentenced Zuma to jail on June 29, decrying his conviction and vowing to block his arrest.

But the area was deserted on Thursday, with only locals on everyday errands strolling across a football field facing the precinct.

Despite the scandals that have tarnished his reputation, Zuma has remained particularly popular among rural communities in his home province of KwaZulu-Natal.

Starting off his life as a herdboy, he is widely viewed as a "people's man" and still appeals for his strong family and cultural values.

A teetotaller and non-smoker, he married seven times and has at least 20 children.

Zuma is separately on trial for allegedly taking kickbacks from an arms deal with several international companies in 1999, when he was deputy president. He denies any wrongdoing.