A Prominent Kumasi Lawyer Versus The Law 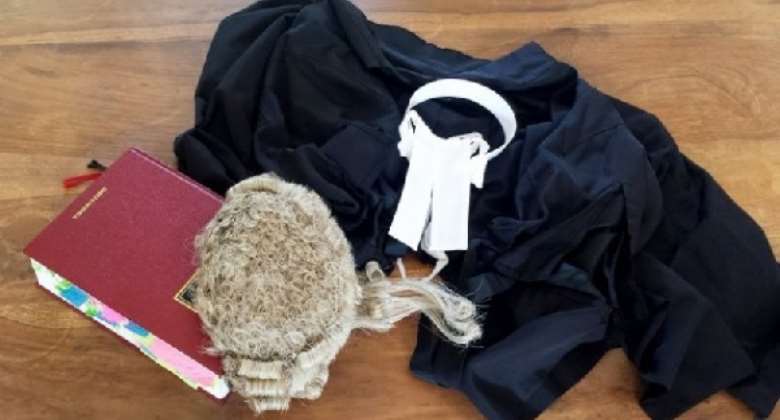 Speak of me as I am. Nothing extenuate, nor set down aught in malice.-Othello-William Shakespeare

WE ARE AWARE of the implication of “sub judice” relating to it – to the extent that as law practitioners we must avoid being cited for contempt when discussing an issue in court. So, therefore, (as Ghanaian – English Speakers will say) we must chart our waters carefully when commenting on issues yet to be settled. We pray for “interlocutory immunity” to land our observation.

But the case of Lawyer Afrifa opens up a Pandora's box: not only to the intended victim (the Chief Justice) but also to the lawyer who fired the salvo and to the administration of justice in Ghana.

The scenario: a client (Nana Ogyeedom Branu Kwesi Atta) writes a petition to the General Legal Council, inter alia: “… so I fired him from the case and asked him to refund the money but he has since refunded US $25,000.00 leaving a balance of US $75,000.00 … All efforts to retrieve the amount have failed…” Then the lawyer (Afrifa) more than twenty years' standing responds: … at the end of July, 2020, the Petitioner informed me that friends of his who were highly connected politically had taken him to see the Chief Justice who had agreed to help him win his case on condition that he stops my good-self as the lawyer handling the case for him and engage Akoto Ampaw, Esq in my stead… He further informed me that the Chief Justice had demanded a bribe US $5m for a successful outcome of his case… so I should refund some of the GH¢ 300,000.00 paid me as fee” What! A “seasoned” lawyer writing this? Some may call it bunkum; some baloney; some thrash… But wait a minute – the public reaction; the political rip-off; and the bastardization of the judicial system.

After Anas Aremeyaw Anas (also a lawyer) had polluted the judicial space with his senseless “investigative journalism” on judges “collecting” bribes of sheep and yam, and escaping a charge of “criminal entrapment” and the sins of the “agents provocateurs” we thought the din had died down with the appointment of the no-nonsense, impeccable Chief Justice Anin Yeboah.

We have very great respect for the lawyers of NDC; after all, didn't Tsatsu Tsikata reject a Presidential pardon (to get out of prison) and fought his case of using GNPC (oil) money to finance salt mining using cocoa guaranteed money and win the case.

Thus, we do not think Asiedu Nketia consulted them before holding a press conference on 13th July, 2021 to ask the Chief Justice to “step aside” because a judge cannot be a judge in his own cause (“nemo judex in sua causa quia non potest casa judex et pars” and “nemo potest esse simul actor et judex”: nobody can be simultaneously suitor and judge). Has justice been turned into a political football or a political ping-pong?

The lawyer had disregarded all the protocols in sections 60, 80, 93 and 100 which talks about lawyer-client privileges – a confidential matter is not to be disclosed to third party.

And Akoto Ampaw writes: “I had originally taken the view that the oblique insinuations in Lawyer Afrifa's response which… became public after he had written to the Council were so infantile and preposterous that they did not deserve the dignity of a response from me. But Ghana being what it is, tomorrow, people might say but Akoto Ampaw did not deny the allegations… What again should Akoto Ampaw say? The Chief Justice denies the allegation and Akoto Ampaw does too.

Perhaps, and possibly, Lawyer Afrifa thought that he had got the opportunity to launch a personal vendetta against the Judiciary for being found guilty in 2017 for “conflict of interest”. In that case, he was the lawyer for Dr. Emelia Timpo in a probate case that involved her mother's estate, in which he subsequently acted against Dr. Timpo's interest by representing her brother called Nana Kwamena Apreh Ackah in a suit numbered C12/230/14. Afrifa spurned all sagacious advice to stay away from the case. He was found guilty on 2 accounts under rule 5 (10) of the Legal Profession (Professional Conduct and Etiquette). Rules which provides; “A lawyer shall at the time of retainer to disclose to the client all the circumstances of his relationship to the parties … (and) shall avoid representing conflicting interests. “A prominent lawyer is expected to know this! Or was the money in the “big estate” drawing him like a magnet?

There may be “doubting Thomases” so in spite of refuting the US$5m bribery allegation, the Chief Justice has written to the Police, and COP Isaac Ken Yeboah says; “I received a request from the Chief Justice … and accordingly referred it to a team of investigators for further action”. For us, this is appropriately in line with “due process”. Some are calling for CHRAJ investigation, and it is their right so to do: in a democracy, you cannot stifle people's freedom of speech. But the Chief Justice has his dignity, integrity and honour to protect. People are at liberty to call for the impeachment of the Chief Justice – but this should follow due process. The Chief Justice had sworn an Oath before the President of Ghana. According to Article 146 (6) of the 1992 Constitution: “Where the petition is for the removal of the Chief Justice, the President shall, acting in consultation with the Council of State, appoint a committee consisting of two Justices of the Supreme Court, one of whom shall be appointed chairman, by the President and three other persons who are not members of the Council of State, nor members of Parliament, nor lawyers…” And Article 146 (II) says: “The President may at any time revoke a suspension under this article”. We shall stop here, and bide our time – till the Disciplinary Committee and the CID of the police complete their investigations…

For, our Lazio Biro pen is still inky and we are ready to do a banter…