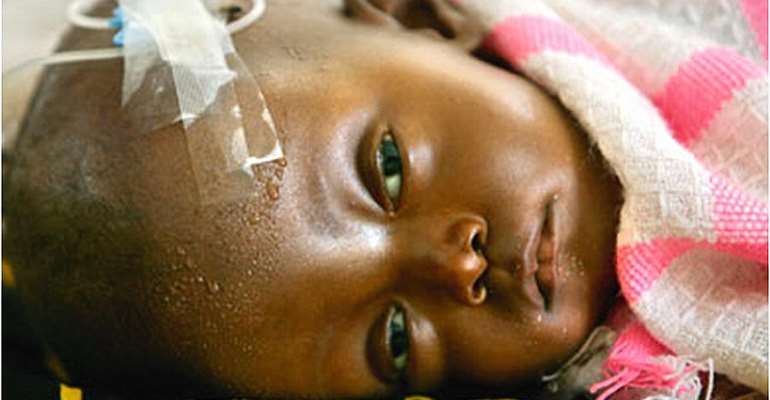 As I was straightening the bed sheets of my patients as part of my morning routines as a nurse, my eyelids were ready for oneness. Last night was very hectic and it kept me vigil throughout. It was my last out of five consecutive night duties.

I had a sigh of relief when I spotted a colleague of the noble profession (nursing) coming for morning shift as I glanced through the window. Gosh, I will go home very soon.

Out of nowhere, a two-year old boy in a comatose state was rushed into the emergency unit by her mother. The poor woman held her child tightly to her bosom as she bewailed "Papa Doctor, Save my child".

Cluelessly, this woman addressed me as a doctor. Well, I was not surprised because that was not the first time I had gained such undue recognition. Perhaps, I look like a doctor or because nursing is a female dominated profession.

I immediately received the child into bed with the side rails elevated. Ouch! his body was hot as blazes. Promptly, I checked his temperature and it recorded 39.8 degrees Celsius. I reported my findings to the immediate in-charge. She violated the hospital's protocol by administering suppository paracetamol instead of tepid sponging as the first intervention stipulated in the framework for managing fever.

Undoubtedly, it was worth taking that approach as it is affirmed in the findings of a research conducted by Samuel Akyirem and Irene F. Bossman which sought to ascertain whether tepid sponging is more effective than paracetamol at relieving fever in febrile children in hot tropical climate.

The findings led to the conclusion that "tepid sponging was not effective against fever, hence, the need to modify existing local protocols to reflect the new evidence and international guidelines". (Samuel Akyirem and Irene F. Bossman, 2020).

The mother was made seated at the nurses’ station and was reassured of competent nursing care to enhance her child's recovery. According to the mother, the child had fever three days ago which she managed with paracetamol purchased from a drug store. Prior to his comatose state, he had a convulsive attack which lasted for about 1 minute.

The Physician assistant on duty attended hastily to the child after he was called via intercom. He ordered for the administration of diazepam per rectum in case there is another episode of convulsion.

Rapid diagnostic test was conducted and the result turned positive. The existence of Malaria parasites in the blood, coupled with the comatose state was an enough confirmation to the Physician's diagnosis (Cerebral malaria) as per the World Health Organization definition for Cerebral malaria.

I set a tray to assist the Physician to access the child's vein. The cachectic nature of the child made several attempts of venepuncture futile. I stood in awe as I watched the Physician pierce the child astutely.

It deemed necessary to shave the hair on the head. Perhaps, we could find a suitable vein on the scalp. I prayed at heart as the Physician entered through the vein and behold, it was patent. I had Goosebumps all-over my skin and finally felt at ease. It was my idea after all and that initiative was worth taking.

The child was put on a standardized antimalarial therapy and was carefully monitored. The mother's preliminary knowledge on the exhibited clinical manifestations was tested and she attributed it to spiritual forces. Her claim was debunked as she was educated comprehensively on cerebral malaria and the importance of seeking immediate medical care in other to curb the disease from exacerbating. The child's condition kept improving subsequently and was pronounced fit to be discharged on the fourth day post admission.

The child had transient mark of neurocognitive complication, specifically, loss of memory which was validated by the mother. The child and mother were bid farewell and was handed over to a community nurse for continuity of care.

Cerebral malaria is a neurological complication of malaria which is confirmed by the presence of the asexual forms of the P. falciparum parasite on peripheral blood smear and the exclusion of either viral or bacterial cause of encephalopathy.

Because invasive testing on brain tissue is not safe, there is a relative paucity of brain pathological data in human. However, research findings suggest that the sequestration of parasites in the cerebral microvasculature is the central factor in the pathogenesis of cerebral malaria.

Mortality is high and some surviving patients sustain brain injury that manifest as long-term neurocognitive impairments. Children under the age of 5 years are the most sufferers of the brunt.

The commonest of the neurocognitive sequelae following cerebral malaria are;

Late admission of children with prodromal signs of malaria precipitates it transition to cerebral malaria and it neurocognitive sequelae.

This article therefore looks forward to sensitize parents and guardians on the existence of neurocognitive sequelae following cerebral malaria and the need to seek immediate medical care during it prodromal stage.