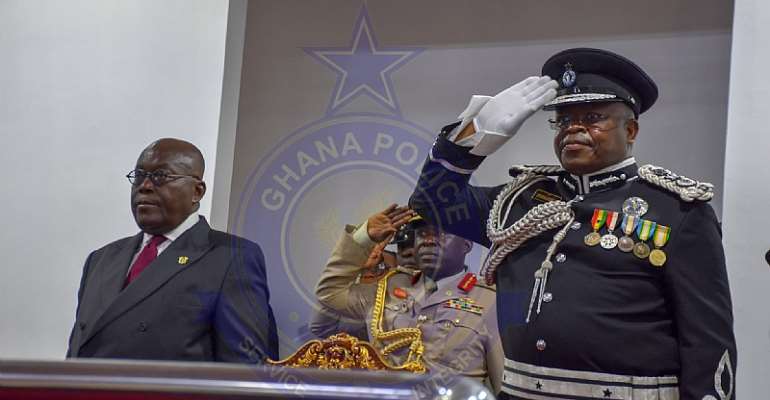 President Akufo-Addo has directed the Inspector General of Police (IGP), James Oppong-Boanuh to go on terminal leave on August 1, 2021, before his expected retirement on October 7, 2021.

“The President of the Republic, Nana Addo Dankwa Akufo-Addo, has directed the Inspector-General of Police, Mr. James Oppong Boanuh, to embark on terminal leave, with effect from Sunday, 1st August 2021, pending his retirement from the Police Service on Thursday, 7th October 2021,” a press release from the Presidency signed by Director of Communications Eugene Arhin has said.

According to the statement, President Akufo-Addo has asked Commissioner of Police George Akuffo Dampare, Ph.D, to serve as acting Inspector General of Police with effect from Sunday, 1st August 2021 until a substantive IGP is appointed.

The statement from the Presidency adds that "H.E Akufo-Addo has conveyed, in person, his gratitude to Mr. James Oppong Boanuh for his dedicated and meritorious service to the nation and to the Police Services as well."

Meanwhile, the Director-General of the Prisons Service, Mr. Patrick Darko Missah, has also been directed to go on terminal leave from Sunday, 1st August 2021, before his retirement from Service on October 16, 2021.