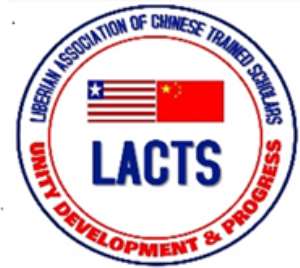 The Liberian Association of Chinese Trained Scholars (LACTS) congratulates and welcomes its members who recently graduated in the Perople’s Republic of China (PRC). Twenty two bilateral and 41 non-bilateral as well as self-sponsored Lberian students recently graduated in China. Two obtained PhD, 48 earned masters, and 19 walked away with Bachelor, among others.

LACTS is an organization of Liberians who have acquired degrees, some levels of education and training in China.

LACTS’ President, Mr. Filmore Wiagbe, thanks the Liberians and challenges them to join the Association in making the China Dream live on by tremedously contributing to the growth and development of Liberia. “I believe China will be happy after educating us if we can support LACTS in promoting the friendship between Liberia and China for mutual undersntating,” Wiagbe indicates.

Wiagbe made the statement Thursday in Monrovia, stating that Liberians trained in China are immensely contributig to Liberia in all sectors of the country.

At the same time, Wiagbe, on behalf of LACTS, has congratulated and commended one of the graduates, Dr. Ponnie Robertlee Dolo for his excellent academic and disciplinary performance in China. He said Dr. Dolo continues to make Liberia proud for being the valedictorian during his July 8, 2021 graduation atthe Xuzhou Medical University in China. Dr. Dolo obtained a super-specialty in Gastrointestinal Surgery and the degree of Doctor of Philosophy (PhD). “LACTS is proud of Dr. Dolo for always coming out with high colors,” Wiagbe maintains.

Dr. Dolo obtained a Bachelor of Science (BSc) degree in 2008 from the Cuttington University in Suakoko Bong County, Liberia. Thereafter, he moved to the People’s Republic of China where he obtained in 2015 Bachelor of Medicine and Bachelor Surgery (MBBS) from the Huazhong University of Science and Technology in Wuhan. He subsequently gained an admission at the Xuzhou Medical University in China where he completed in 2018 a Master degree (specialty) in General Surgery. He is also a trained bariatric surgeon with extensive expertise in minimum invasive surgery (MIS) including laparoscopic surgery.

Dr. Dolo is an accomplished researcher with more than 10 original scientific publications (six as first author), his research is focused on the mechanism of diabetes remission after gastric bypass surgery for obesity. In 2018, he was elected to membership of the Society of American Gastrointestinal and Endoscopic Surgeon (SAGES). He is also a member of the International Federation for the Surgery of Obesity (IFSO), The Obesity Medicine Association as well as the Chinese Society of Metabolic and Bariatric Surgeon (CSMBS).”

Additionally, Dr. Dolo lectures at the School of International Education of Xuzhou Medical University MBBS program and has mentored many Chinese graduate students as well as other international medical students.

Meanwhile, Dr. Dolo said he is guided by the principle that “Anything is possible” and “anyone can achieve anything”.

He concluded as saying, “I believe that in order to continue growing as a person in your respective craft, you have to aim outside of your comfort zone and push yourself to stretch for things you cannot yet do, quoting former Liberia’s President Ellen Johnson Sirleaf that, “If your dreams don’t scare you, they are not big enough”.