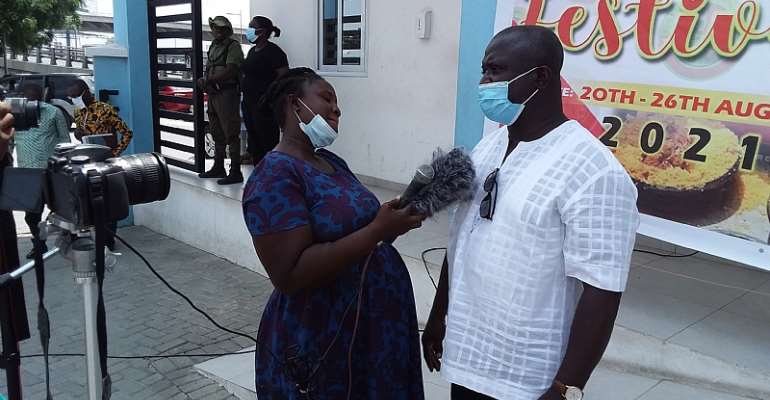 Hon. Adjei Tawiah speaking to the press after the launching.

The Korle Klottey Municipal Assembly (KOKMA) in the Greater Accra Region in collaboration with the Adabraka and Osu Traditional Councils have launched the 2021 Ga Homowo Festival.

Speaking at the forecourts of KOKMA , at Adraka,Accra on Wednesday, the Municipal Chief Executive(MCE) for the Assembly , hon. Samuel Nii Adjei Tawiah underscored the unique importance of this year's celebrations.

The MCE mentioned that unlike last year, this year's Homowo celebration will be different and unique because several programs would be unveiled as part of the celebrations.

He expressed his profound gratitude to KOKMA's Coordinating Director, Mr. Emmanuel Biessy ,who is the brain behind the innovations in this year's Homowo festival.

Among the activities earmarked for this year's celebration is a food bazaar to help showcase Ga Dangbme delicacies to the outside world. Numerous Ga Dangbme foods are gradually disappearing from the system as the people only knew of only the kenkey and fish.

" There is therefore the need for us to create awareness about all the foods of the Ga Dangme people," he pointed out.

He continued, "Another important aspect of the festival is the need to reintroduce the teaching of the Ga language in the respective schools within the Assembly."

This, he said the Assembly is taking it very serious because the language is fast disappearing.

"My Assembly has therefore earmarked some money to train people in the Ga Dangbme language to teach in the various schools".

He attributed the fast disappearance of the language to the lack of qualified people to teach the language in the schools.

To make President Akuffo Addo's resolve to make Accra the cleanest city in Africa, the Assembly has embarked on a cleanup exercise to get the Municipality rid of filth.

In that regard, all unauthorised structures are being demolished. He therefore tasked the environmental and planning departments of the Assembly to continue with the exercises and that the Assembly is fully in support of the exercise.

The 2021 Homowo Festival is to also create attention on the culture of the Ga Dangbme and to also foster peace and unity among different people living on the Ga land.

The KOKMA political head enumerated certain indelible achievements of his Assembly since its creation in 2019.

With the outbreak of the Covid-19 pandemic early last year, the Assembly was able to set up an isolation centre. "We also settled around Ghc 500,000 debt owed by the Osu Presby School and also ensured that the school is provided with clean portable drinking water and electricity."

Currently, Hon. Samuel Adjei Tawiah disclosed that they are establishing a landing beach at the Osu seaside as well as a fish market for the people of the Municipality and beyond.

The MCE however , mentioned that KOKMA lacks enough office space and therefore appealed to chiefs and people to help the Assembly secure a land that will be used in putting up a befitting office complex for the Assembly.

The launching was attended by chiefs and queen mothers from both the Osu and Adabraka Traditional Councils respectively, assembly members, departmental heads and staff of the Assembly.