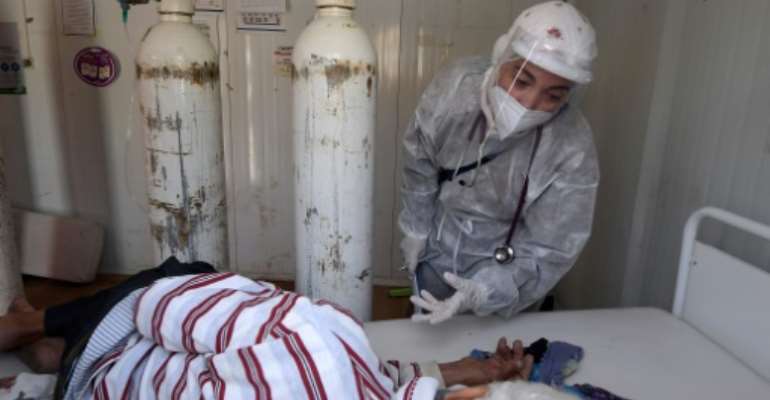 Tunisia's government stumbled deeper into crisis on Wednesday over its handling of the coronavirus pandemic, after premier Hichem Mechichi fired the health minister amid skyrocketing cases in the North African country.

Mechichi, whose office had announced Faouzi Mehdi's sacking in a brief statement on Tuesday evening, slammed the minister's performance, pinpointing a critical lack of oxygen at Tunisian hospitals and a slow rollout of vaccines.

"There's an extraordinary level of dysfunction at the head of the health ministry," Mechichi told health officials in footage published on his Facebook page late Tuesday.

Tunisia has been facing an overwhelming Covid-19 caseload that has left more than 17,000 people dead in a population of around 12 million.

The country's hospitals have faced acute shortages of oxygen, staff and intensive care beds, and fewer than eight percent of the population are fully vaccinated.

Tunisia has seen a sharp spike in Covid-19 cases in recent weeks. By (AFP)

Mehdi's sacking came a day after the start of a temporary opening of vaccination stations to those over 18, to mark the Eid al-Adha Muslim festival.

But that led to stampedes at some of the 29 vaccination centres, where jab stocks quickly ran dry.

Mechichi slammed the programme as "populist" and "criminal".

"Neither the head of the government nor the governors nor the security services were aware" ahead of time, he said.

But analyst Selim Kharrat suggested that Mehdi had been made a scapegoat.

"There have been contradictory decisions, restrictions haven't been implemented, and there has been a failure to think ahead," he said.

Kharrat noted that the health ministry had warned in May over potential oxygen shortages.

Oxygen concentrators sent from France in early June are not yet fully operational due to bureaucratic delays.

In some cases, bodies of victims have been left lying in hospital wards next to other patients for up to 24 hours because there were not enough staff to organise transfers to overstretched mortuaries.

According to Our World in Data, Tunisia currently has the third highest rate of daily Covid deaths per population in the world, after Ecuador and Namibia -- although the World Health Organization has said it is more transparent with its data than many other countries.

The government of war-torn neighbour Libya in early July closed their shared border and suspended air links with Tunisia over the rocketing caseload.

Tunisia has also struggled to get its coronavirus vaccination campaign off the ground.

The country's fractious political class have been unable to form lasting, effective governments.

Since President Kais Saied was elected in 2019, he has been locked in a showdown with Mechichi and parliament speaker Rached Ghannouchi, which has blocked ministerial appointments and crippled the state's ability to tackle Tunisia's multiple economic and social problems.

"We have a head of government who uses his ministers as fuses, to absorb any public dissatisfaction," Kharrat said.

"But how long can that last?"