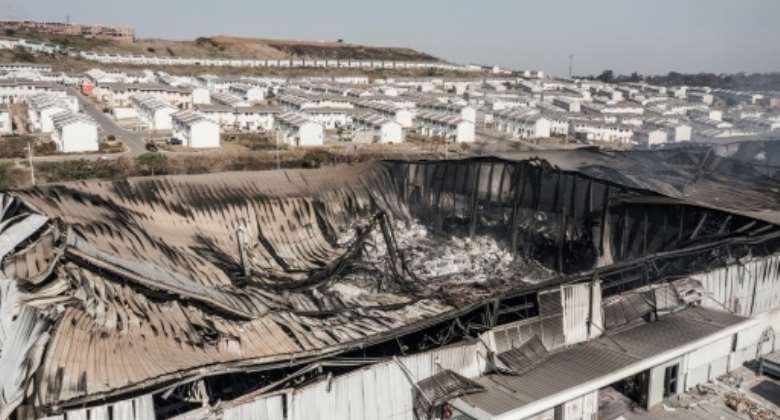 Destruction: The smouldering remains of a warehouse in Durban's Ushukela Industrial Park. By MARCO LONGARI (AFP)

Small fires still smouldered under the collapsed roof of a label-printing company in Durban, filling the air with an acrid smell of chemical combustion, days after devastating riots shook South Africa.

Two young and visibly despondent workers, in T-shirts, looked at the smoking heaps of ash that once were wheels of adhesive paper loaded into now-obliterated printers.

"I don't think anything can be salvaged," one of them, a factory supervisor said, treading carefully around charred machinery remains.

His colleague, a forklift driver, shrugged and hovered sadly by the entrance, battling to come to terms with the destruction.

They asked not to be named as they were not cleared to speak on behalf of their employer.

One of the constructors of the building -- which was just five years old -- pulled over and took pictures of the damage with her smartphone.

Aftermath: A woman uses a torch to clear debris at a looted shop in Durban's Dube Village Mall. By GUILLEM SARTORIO (AFP)

"This whole thing will need to be torn down," she sighed.

"If this is the destruction we can do to the country in a week, why would anyone invest?"

The Ushukela Industrial Park in the southeastern port city -- its name means "sweet" in Zulu -- was one of several that were blitzed in a spree of arson and looting that hit parts of South Africa last week.

Across the road, hundreds of smashed television screens were strewn across the entrance of a blackened LG Electronics factory, which had relocated less than a year ago from South Africa's financial capital Johannesburg.

Dismantled washing machines and air conditioners lay under the sun, alongside an occasional shoe presumably lost by fleeing looters.

A security guard kept watch over the debris, still targeted for scrap metal and spare parts.

Manufacturing is a backbone of Durban's economy, boosted by proximity to one of the largest and busiest shipping terminals in sub-Saharan Africa.

Large factories and warehouses line the outskirts of the lush ocean-facing city, which is also a popular tourist destination.

Those buildings were heavily targeted by mobs, who plundered stock and lit fires in violence sparked by the jailing of South Africa's graft-accused ex-president Jacob Zuma.

The unrest rapidly spread to Johannesburg before 215 died in stampedes, crushed by falling objects or caught in blazes.

Companies are struggling to pick up the pieces.

On a hilltop overlooking the industrial suburb of Pinetown, around 20 kilometres (12 miles) from the coast, workers at a dairy products warehouse picked through broken milk bottles and margarine tubs.

The floor was coated in pungent, slippery brown slush.

Residents from a nearby informal settlement lingered outside, scavenging through smashed bottles and cans still littering the road.

Destroyed: The remains of the Amcor Flexibles packaging plant on the outskirts of Durban. By MARCO LONGARI (AFP)

The blackened skeleton of a factory run by Australian-American packaging company Amcor -- one of three plants in South Africa -- loomed behind them, still smoking.

Police officers stood by in case bodies were found during clean-ups.

One member of the search team grimaced and pointed at a nearby frozen meat packaging company that had not yet been cleared for access after it had been set on fire.

"I do not want to be the one going in there," another police officer said. "It has already started to smell."